Trees as old as time

Bonner County’s ‘big trees’ are part of its long history

My first spring in Sandpoint, I visited a friend at her cabin and she wouldn’t let me leave without a visit to “the big tree.” The property behind her home turned into a mass of creek channels during spring run-off, and she lent me thigh-high muck boots to slog through the frigid water. Clinging to shrubs, I propelled my way across, only looking up when I was on dry land again. I was standing in the shadow of the most incredible tree I had ever seen, a lone western red cedar whose fellows had been cut or fallen decades before.

More than eight feet in diameter, it was stretching out into the creek, looking as though it might go for a walk at any minute. The interplay with water through the years had sculpted its lower trunk into a fantastical twisting growth of burl and roots. 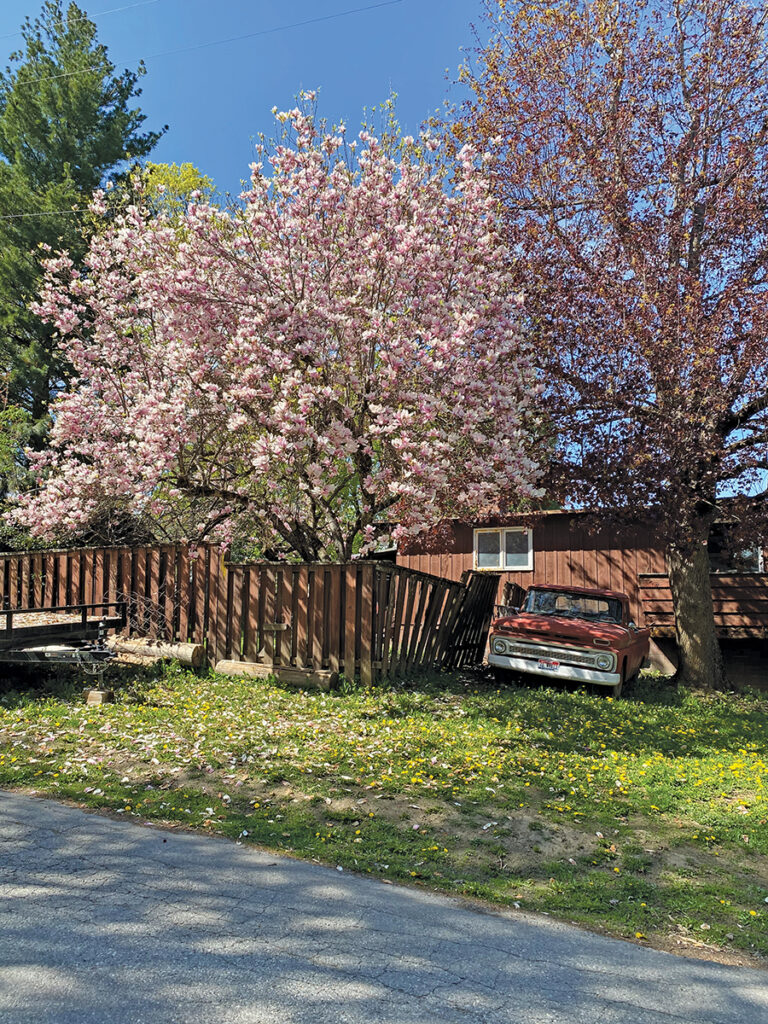 A magnolia tree in full bloom in south Sandpoint. Photo by Hannah Combs.

Coming from the Midwest, this first encounter with a “big tree” was a moving experience, with waves of pure wonder pouring over me. For those who have lived their entire lives here, the imposing trees of the West may not be such a surprise, but they still inspire awe and respect.

As one of our native species, cedars have played a role in local history for thousands of years. The cedar has been used by the Kalispel tribe for many daily practices, from building canoes and bark baskets to smoking fish, and cedar is still a popular building material, cut and milled for everything from roofing shingles to guitar soundboards.

Cedar forest provides wildlife habitat for species like black bears and hairy woodpeckers, and old growth stands are resilient to forest fires because they do not support the dense understory that provides fuel for the fire.

After more than a century of human development, pockets of old growth cedar can still be found close to home. Though the Roosevelt Grove of Ancient Cedars northwest of Priest Lake and the Ross Creek Cedar Grove just across the border in Montana are two of the most popular places to stand among these giants, cedars can be found all over Bonner County.

The “Grandfather Tree” at Schweitzer is one iconic example. Nestled near the Springboard run in the Outback Bowl, the towering cedar can be discovered in the winter or summer months, though a summer hike might entail more of an expedition.

Though neither native to North Idaho nor as imposing as the cedars, the magnolia tree’s history goes back much further. Known for its exquisite and ephemeral pale blooms, the magnolia was one of the earliest flowering plants, developing during the Cretaceous Period. The fossil record shows magnolias on Earth as early as 95 million years ago.

The magnolia developed some interesting characteristics throughout its ancient past.

According to local gardener and BCHS Volunteer Coordinator Jacquie Albright, “The petals of the magnolia flower are quite strong and feel thick to the touch compared to other petals.”

That is because the magnolia was around before bees and butterflies, so it adapted for a different pollinator.

“The petals have to be strong enough to hold a beetle as it enters into the center of the flower,” Albright said.

The oldest magnolias are native to eastern Asia and eastern North America — the magnolia is the state flower of Mississippi, where the record-holding largest tree stretches to 122 feet and has a diameter of more than six feet. Yet, the 200+ subspecies of the tree have adapted to a variety of climates, including that of North Idaho. With blooms that usually appear before the leaves, magnolias always put on a stunning early spring display, which can be seen throughout our community.

Bonner County is home to a few record trees of its own. The University of Idaho Big Tree Program recognizes six Bonner County trees as the largest in the state: the Douglas maple, red alder, butternut, subalpine larch, paper birch and black cottonwood.

The record-holding subalpine larch can be found near the upper Roman Nose lake. The paper birch and black cottonwood can both be seen on the Gooby farm near the base of Gooby Road. The Sandpoint Tree Committee’s “Outstanding Trees of Sandpoint, Idaho” booklet says of this black cottonwood, “This multistem giant measures 8 feet in diameter and reaches a height of 113 feet.” The black cottonwood’s sap was used by some Native American tribes as a glue or even for waterproofing, and today its flower buds are used in some perfume fragrances.

Whether your favorite tree is hidden deep in an old growth forest or on colorful display for everyone to see, take a moment this spring to visit your tree and stand in awe of its beauty. The history of these ancient species precedes us, and there is much to learn from their grace and resilience.

Brought to you by the Bonner County Historical Society and Museum. Research courtesy of U.S. Forest Service, Sandpoint Tree Committee, University of Idaho and Jacqueline Albright.