Who are you in the age of Zoom?

A YouTuber named Preston Reid recently produced a video titled “Different types of Zoomers,” in which he demonstrated more than a dozen different personalities you’ll encounter during Zoom calls. The video, which went viral thanks to so many people utilizing the video call application during the ongoing COVID-19 pandemic, includes the Virtual Backgrounder, The One in Front of a Window, The One With Pets, The One on an iPad and more. 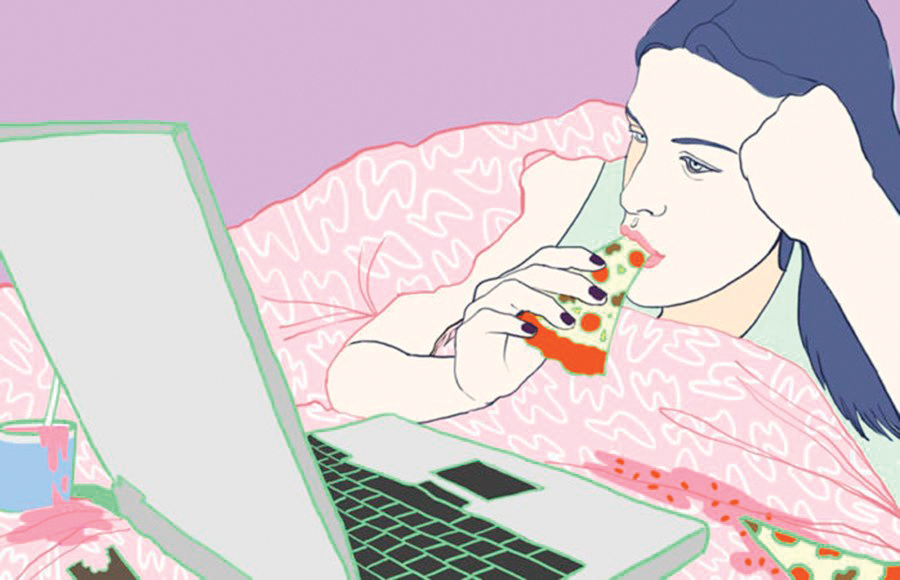 A rare sighting of the elusive “Pizza Zoomer.” Courtesy image.

As for the weekly Sandpoint Reader editorial meeting, currently held over Zoom each Friday morning, we have our own variety of video conference personas.

I am the Exotic Locale Zoomer. Without adequate internet service at my house in east Bonner County, I venture down to the local store to use the faster WiFi. Sometimes my background is a sunny lake view while I sit on the deck at the store. Other times, it’s the backside of the building, where I hide from the coffee club that meets out front. Most recently, I Zoomed while sitting cramped and cross-legged in my car, parked near enough to the building to scrape the internet but away from the banter of the coffee club and out of the rain.

My Zoom style may give the endearing impression that I am adventurous and versatile. However, it more adequately illustrates my desire to secure better WiFi at my house.

When I do get to sit in peace and (almost) quiet on the deck, I often wear the hat of Social Butterfly Zoomer as I smile, wave and mouth a quick “hello” to almost everyone who enters the store. This involves the occasional removal of headphones and a breathless “I’m-in-a-meeting-can’t-talk-right-now” greeting when the silent “hello” doesn’t quite get the point across.

Then we have Zach — well dressed and only occasionally suffering from audio connectivity issues. The first time we attempted to meet via Zoom, we spent a solid 10 minutes pantomiming problem-solving suggestions to one another until he finally used Zoom’s chat feature to type “I ****ing hate the ****ing 21st century.”

Seeing as anyone who knows him would agree that Zach does not, in fact, belong in the current century, he is our Reluctant Zoomer — not necessarily because he doesn’t want to use the application, but because he appears so perfectly out of place during a conversation through a computer screen.

Zach also doubles as our resident Homeschool Teacher Zoomer, as he handles a work meeting and keeps his school-age children on task at the same time. Here’s to all the parents juggling that life right now — you’re almost to summer break.

Finally, we have Ben. He directs our meetings, sharing his screen through Zoom so that we can all see the layout of the upcoming newspaper. Ben could almost fit the bill of The Drinker, from Reid’s YouTube compilation, in which Reid sips from three different drinks in rapid succession. However, Ben always has one drink: a vibrant glass of delicious and nutritious Emergen-C (this may seem strange, but have you ever seen the man sick? No).

Ultimately, Ben is the Zoomer With His Shit Together — mostly prepared, sitting in a consistent and tidy spot in his apartment, sending links for the meeting and asking us how we’re doing while we abruptly join the meeting from strange locations with audio troubles. Alternatively, Ben could be called the Mother Hen Zoomer. Every meeting has one — think about it.

We have been able to plan great issues over Zoom, although the process has not been ideal for anyone. I look forward to the day we can meet in our dorm room of an office again, where we all can assume our normal in-person identities: salty journalists, ready to tackle another week.