It was no surprise to Sandpoint officials when Thorne Research announced it was moving to South Carolina.

The possibility was on Sandpoint City Administrator Jennifer Stapleton’s radar as soon as she was hired last year. Sandpoint Planning and Zoning Director Aaron Qualls and Bonner County Economic Development Corporation Director Paul Kusche had been working on the problem even longer.

“It felt like their minds were made up about a year ago,” Qualls said. 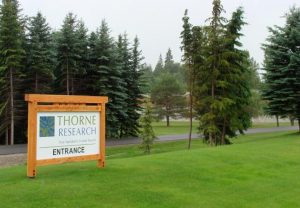 The entrance to Thorne Research in Dover. Courtesy photo.

Company officials broke the news to their 270 regional employees last week, detailing the move to Summerville, S.C., and the construction of a 270,000-square-foot production facility. The announcement left community members wondering how the local economy would be impacted by the loss of jobs. While it’s still too early to say how many employees will leave and how many will be absorbed by other local companies, Kusche and Qualls said the loss will likely ripple into other markets.

“It does have an impact on retail, and it does have impact on housing that will now be available,” said Kusche.

It’s not easy to compete in the globalized market of business courtship. Idaho lacks both the resources and policies of a state like South Carolina, which Qualls said offered close to $35 million-worth of incentives for Thorne Research to relocate.

“Our strategy is primarily on retaining our existing companies, which has been, I think, a good strategy so far,” said Qualls.

Retaining Thorne proved untenable, as Qualls said one of the city’s strongest perks—its quality of life through amenities, recreation  and natural beauty—was unpersuasive. While the North Idaho lifestyle is a major factor in retaining growing businesses like Litehouse Foods and Kochava, the location was more a detriment than a bonus for Thorne executives. They disliked the full day of travel required to visit company headquarters and had trouble with spotty cell service, Qualls said. They also complained of a common problem in Idaho: a dearth of qualified workers.

That problem is why Qualls and Kusche are steady advocates for improved workforce training and education. It’s a priority they’d like to see on both a state and a local level, from increased support by the Idaho Legislature to an expansion of training and education programs in North Idaho.

Qualls also said it’s important to maintain and protect the signature Sandpoint quality of life, a goal the city seeks to accomplish through projects like the Memorial Field renovation project. What’s more, recent analysis shows that the local option tax funding the Memorial Field project should bring in a surplus, meaning that other parks will benefit from additional improvements. One possibility is a proposed City Beach master plan, which would guide the city park’s development for the next several years.

While the loss of Thorne Research is a setback for the regional economy, local economic planners take heart in the job-friendly improvements already under way. The expansion of fiber internet is accelerating with the city, Bonner County and Lake Pend Oreille School District’s selection of FatBeam to supply its internet service. And Stapleton said Ting is poised to initiate its Sandpoint expansion in 2017, bringing another source of high-speed internet to the community.

Perhaps most encouraging for economic planners are the several growing companies that are committed to staying in the Sandpoint region. Kochava recently completed its move to its new downtown headquarters. Litehouse Foods is preparing to expand its local production facility. And following Quest Aircraft’s purchase by Japanese firm Setouchi Holdings, the company has only made overtures of strengthening Sandpoint’s international business and cultural ties.

“You see companies making a lot of investments, expanding their workforce, equipment, facilities,” Stapleton said. “You can only look at that as a positive sign.”