To sell or not to sell

About 35 people attended the Panida Theater’s Town Hall meeting June 7, where board members took the temperature of the community regarding an idea to sell the adjacent Little Theater to generate revenue and fund much-needed restoration projects for the main theater. By the end of the meeting, it was clear a majority in attendance favored exploring other options before making any quick decisions.

Board chairperson Keely Gray stressed at the beginning of the meeting that “no decision has been made by the board,” in regards to selling or retaining the Little Theater, and that the board wished to hear from the community first before any decisions were made. 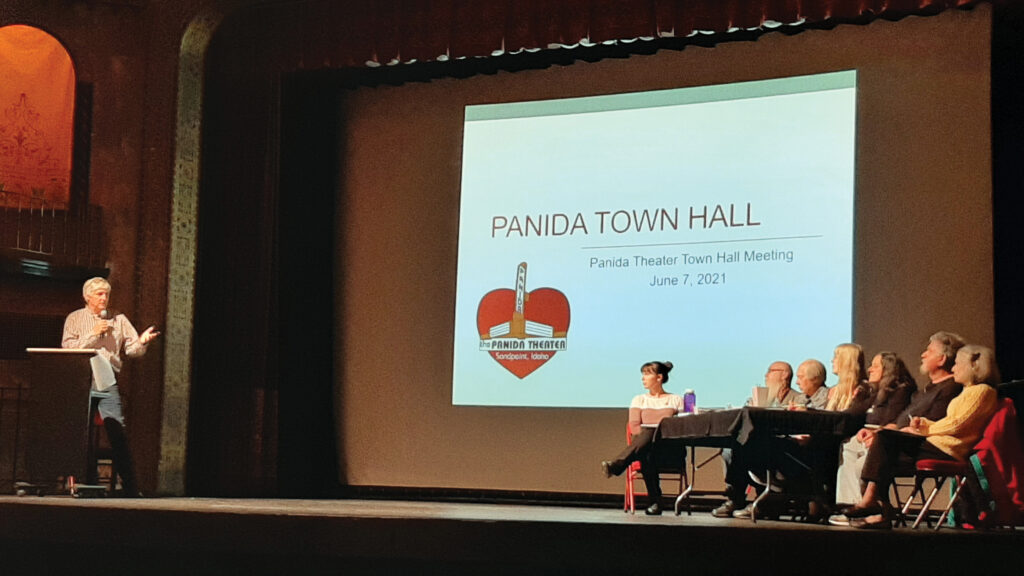 “We have undergone many changes in our organization and we now find ourselves at a very important crossroads,” Gray told the crowd.

Gray said after consulting two different realtors, the board learned that with the real estate market at a record high, the Little Theater could potentially be worth anywhere from $700,000 to more than $1 million.

“Sandpoint as a whole is experiencing growth like it has never seen before,” Gray said. “Eighteen years ago, when we purchased the Little Theater, there was a vision to connect the theaters. Unfortunately, this vision never came to reality.”

The seven board members outlined several issues with the Little Theater, including the roof that is in dire need of repair. Other reasons to consider selling included the fact that a sale would provide funds to restore the main theater — the Little Theater never generated enough revenue to pay for itself, there is constant upkeep and repair needed, and the Little Theater was never incorporated into the larger theater.

The Little Theater was purchased 18 years ago for $300,000, according to former board member Marcella Nelson, which the board also listed as a reason to sell: “We could potentially quadruple our investment in the building next door,” Gray said.

The board also shared reasons for retaining the Little Theater, including the fact that that it could be rented as a commercial space, the Panida could control what moved in next door, a plan to merge the two spaces could still be realized someday and it is the only black box theater in town — a name referring to a smaller theater venue.

One of the market evaluations claimed the Little Theater was zoned commercial and a maximum height allowed would be 65 feet if used for townhomes or condos and 35 feet for commercial. The only prohibition would be single-family residences. This drew concern from some in the audience over having a potential four-story condo building downtown next to the Panida.

Audience members offered a variety of opinions during a question-and-answer period. Most praised the board for its transparency and for including the community in the decision-making process.

Stephen Drinkard suggested the city of Sandpoint invest in the Panida, as it has with the Sandpoint Senior Center, as well as exploring more grant options before making any hasty decisions.

“We all saw what happened with the U of I extension property on Boyer,” Drinkard said. “The city could have saved that property and they didn’t. Now it’s gone. Once you sell the Little Theater, that’s it. It’s gone.”

Dyno Wahl spoke, representing the Pend Oreille Arts Council, urging the board not to act too quickly and sell the theater for a short-term financial gain.

“The one word that comes to mind when I think of the Little Theater is ‘potential,’” Wahl said. “Potential needs money, and there’s money coming into this town right now. I think you should hang on, put the brakes on a bit, because this real estate bubble isn’t going to burst any time soon.”

Former Panida board member Phyllis Kardo reminded the board that, “Twelve years ago, when plaster was falling from the ceiling, this board raised $760,000 in a six-year period. It is possible. I hate to give up on the building. I think this can be done.”

Michael Boge, a local business owner and host of the popular Banff Mountain Film Festival in Sandpoint, said it would be a blow to lose the Little Theater, but it was also important to identify the main priority.

“We need to ask ourselves, what’s the motherlode here?” Boge said. “It’s the main theater. It’s the Panida. That’s why we’re all here.”

Boge said long-term lease options should be considered for the Little Theater, with potential lessees undertaking the expense to repair the roof, while the Panida retains ownership of the building.

Dave Eacret, who said he worked as an economist involved with restoring the iconic Davenport Hotel in Spokane, said he saw analogies between the Panida’s situation and the Davenport’s.

“The Davenport is a world-class hotel, known all over the world,” Eacret said. “This is a microcosm of that right here. The opportunity cost of losing this building next door is an extreme move. … Let’s not lose an asset here. Once you do, you can’t redeem it.”

Some in attendance questioned the disparity between market evaluations, with a local realtor estimating the property was worth $700,000 only after $128,000 worth of roof repairs would be made. The other evaluation came from a Spokane realtor, who estimated the market value could be as high as $1.2 million in as-is condition.

Ellen Weissman offered an idea for the Panida fundraising committee to send out postcards to all performers who have played on the Panida stage urging them to offer any financial assistance they can to save the theater.

Another idea was introduced to hold an Extreme Makeover-type fundraising campaign to include area construction companies to donate their labor for repairs in exchange for sponsorship opportunities, including a corporate sponsor that could potentially have their name included in the Little Theater’s signage.

Board member Tari Pardini stressed that for the past two fiscal years, the theater has been operating at a loss to the tune of about $50,000 a year, not counting the past fiscal year, when COVID-19 affected attendance and revenue.

“Even with grants and donations, we’ve been running in the red,” she said.

“As a board, we are responsible for the financial operation of this theater,” Gray told the audience. “We need help, and we had to at least go through the effort to see if this is the right decision or not. That’s why we’re so grateful to hear your feedback on this idea.”

No actions were taken at the end of the meeting, but the board encouraged anyone who wants to get involved in the fundraising committee to step forward and help out before the option of selling the Little Theater moves from a choice to an imperative.