Decision comes in the wake of a contentious anti-mask protest

The East Bonner County Library District closed its doors and transitioned back to a curbside pick-up system on Aug. 1 due to the rising number of novel coronavirus cases in Bonner County.

“Our patrons’ health and safety are of the utmost concern,” Library Director Ann Nichols told the Sandpoint Reader shortly after the decision. “In order to protect the public, the East Bonner Library District is resuming curbside service in response to the spike in COVID-19 cases in our area.”

This comes after a handful of anti-mask protesters gathered outside the library July 28 demanding to be let in without required face coverings. Library staff called Sandpoint police, and officers informed protesters that the East Bonner County Library Board of Trustees has the right to create rules for its facilities. 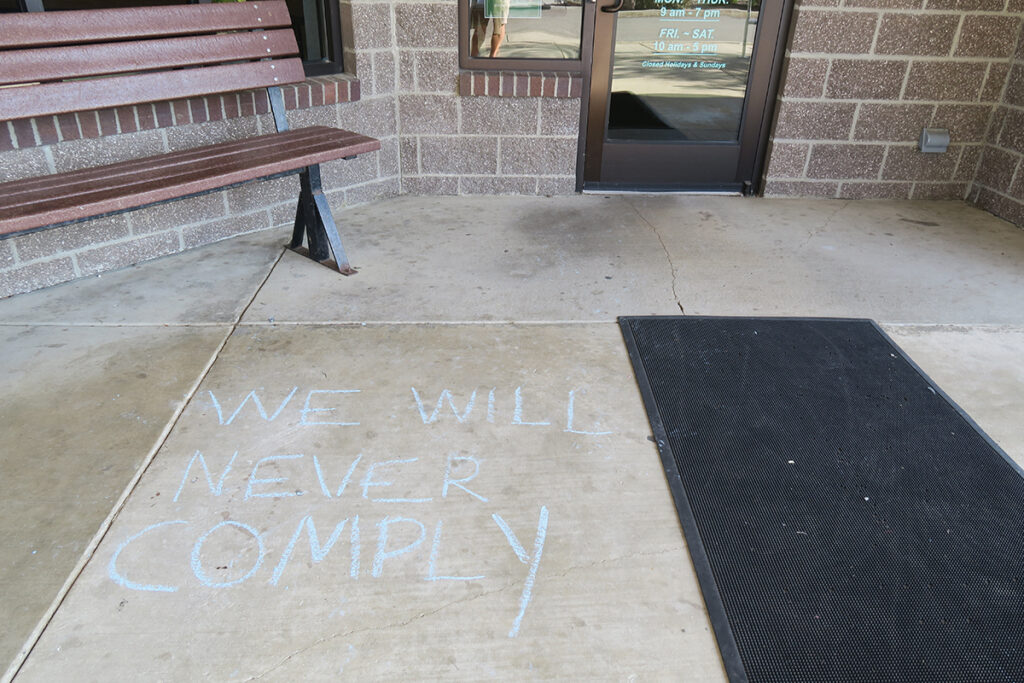 A message written in chalk outside the front door of the Sandpoint Branch of the East Bonner County Library District during an anti-mask protest July 28. Photo by Ben Olson.

Nichols told the Reader that when asked if they were card-carrying patrons, a number of protesters said they were from elsewhere, one man telling Nichols he was from Seattle.

“Apparently, a small minority of local residents organized by a group outside of our community chooses to ignore best practices in favor of perceived First Amendment violations,” Amy Flint, chair of the library board, told the Reader.

Flint said Nichols and several board members received “a barrage of emails” opposing the mask mandate following the protest. Nichols also received phone calls threatening lawsuits, and some said they would be back to the library — or outside of board members’ homes — to protest further.

The board had scheduled a Zoom meeting for the morning of July 31, which Flint said was intended to refine the face covering policy after a protester attempted to enter the library with a mask made from a mesh material full of holes. Word of the meeting began to circulate on social media, and many people voiced a desire to attend and make their anti-mask views heard.

Flint said the person who posted about the meeting on Facebook “indicated that ‘we are going for the jugular,’” meaning mask opponents planned to come in force to the Zoom meeting.

“After careful consideration — and in the interest of protecting staff, patrons and trustees as well as avoiding a ‘Zoom Zoo’ — we cancelled Friday morning’s meeting and decided to return to curbside only pick-up effective Saturday, so the library will not be physically open to the public,” Flint said.

Flint emphasized that the move back to curbside services is only temporary, and that the Sandpoint and Clark Fork branches “will reopen as soon as possible with a revised and improved mask requirement.” Library officials also stated that “our decision to close is based on public safety in response to the spike in cases.”

In the meantime, library patrons can access physical materials by placing a hold at ebonnerlibrary.org and scheduling a curbside pick-up time via email. The library website also offers many digital resources that can be accessed from home, including free music, movie streaming and ebooks.