For more than two decades, the Long Bridge Swim has gone off without a hitch. But this year, Mother Nature had other plans.

Organizers of the fundraiser decided to cancel it Saturday — the first time in its 23-year history — after intense winds created waves that left experienced kayakers struggling to stay upright. According to Long Bridge Swim Director Jim Zuberbuhler, the team determined that the risk of an accident was too high. 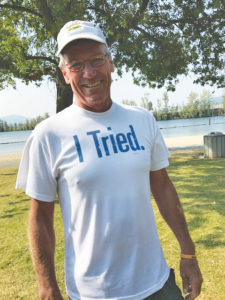 Kayaker Craig Brenden’s T-shirt proved apropos after he braved the lake for the Long Bridge Swim. Photo by Courtney Sanborn.

“Even (as we made) that decision in front of 700 people, it was not hard, because it was the right thing to do,” Zuberbuhler said.

According to Zuberbuhler, the team was aware that conditions could become dangerous. The National Oceanic and Atmospheric Administration contacted them prior to the event and warned them of predicted high winds and choppy waters that morning. Planners decided to take a wait-and-see approach, preparing for the swim as usual but not ruling out the possibility of cancellation.

“Our inkling (that there could be a problem) started early, so of course, we were not surprised,” Zuberbuhler said.

The day of the swim began much like any other year, with 711 swimmers gathering Saturday morning for a pre-event safety presentation.

“We indicated to people it was entirely likely we would have a cancellation or delay because of strong wind conditions,” Zuberbuhler said.

Even as Zuberbuhler and other organizers were prepping participants for the swim, the 90-person-strong safety kayak team was testing the Lake Pend Oreille waters. While battling white-capped waves several feet in height, many of the paddlers flipped or were nearly overturned by the waves. Given the experience of the kayak crew, it was evident that the lake was unfit for swimmers, Zuberbuhler said.

“Some of these people have been with us for 15 or 20 years, so these are very competent kayakers,” he added.

According to kayak crew coordinator Courtney Sanborn, the kayakers began the day testing the waters and watching for conditions to improve. Instead, conditions worsened as the morning progressed. Kayakers said the waves were huge and gusting in from all directions.

“The waves were easily three-foot tall, some up to four feet,” said lead kayaker Steve Neff. “I was genuinely concerned for my people.”

A separate crew of jet skiers tackled the waves to assist imperiled paddlers. Sanborn said the jet ski volunteers were invaluable in helping kayakers to safety, going so far as to tow several to shore.

“It very quickly went from a seeing-if-we-could-have-a-swim event to a deploying-a-kayak-rescue event,” Sanborn said.

With the safety team unable to deploy, Zuberbuhler made the call to cancel the event.

“Of course, some people were disappointed, but I was very impressed with how supportive our swimmers were and how our support team just turned on a dime,” he said.

Many participants backed Zuberbuhler’s decision. One man, who travels every year for the swim and consistently ranks among the top swimmers, mentioned to Zuberbuhler that he would have canceled the swim if it was his call. Another elderly woman said the safety kayaks made it possible for her to participate in the Long Bridge Swim.

“All the data we had suggested that too many people would be put at risk,” Zuberbuhler said.

With this year’s swim canceled, planning turns to next year’s event. As always, event volunteers are focused on the Long Bridge Swim’s purpose: to raise money for child swimming lessons. The goal is to ensure that all children receive swimming lessons by third grade. Under the circumstances, Zuberbuhler said the majority of participants understood that an organization devoted to swimming safety should practice what it preaches.

“That has truly been so satisfying for me in my role,” he added. “It just elevates our commitment to this enterprise.”