The Sandpoint Eater: Pick a pepper

It’s not easy to pick a favorite chile pepper, as there are literally a couple thousand to choose from, but I’ve learned from experience which ones work with my palate (and respiratory system).

On my recent 30 hours of driving to (and 30 hours from) Chicago, I had lots of time for mental menu planning. My son-in-law, John, is a “like it hot” sort of guy, so I knew I wanted to spice up a couple of meals from the large assortment of peppers available in the big city.  I also had time to reminisce about a couple of huge, past pepper fails. Did I say HUGE?

The first occurred when, as a novice pepper handler, I thought I could sweat peppers in the microwave. I am here (thankfully) to tell you that a microwave and hot peppers is never, ever a good idea. I can’t even remember what type of peppers I was prepping — probably just a household variety like a jalapeno — but the capsaicin in any pepper is highly intensified at high temperatures. Fortunately, they did not explode and force open the door (that was a completely different, garlic episode), but if I could have bottled the fumes that hit my face when I opened the microwave, I’d have my own pepper spray factory.

Thank goodness no one else was home that fateful day as I ran blindly through the house, groping my way to find the front door.

My next chile encounter was in New Mexico. On a private train layover in Sante Fe, I headed to the fabulous farmer’s market there — basket in hand — to find some local, medium-spiced chiles for dinner the following night. It’s a colorful market, with lots of multi-generational and sun-weathered farmers selling an expansive array of exotic and interesting chile peppers spread on colorful native blankets. With recommendations from a couple of seasoned vendors, I bought the peppers best suited for a flavorful batch of colorful piri piri sauce that would complement a mixed grill of meats.

Back in the galley of the dining car, I poured out my peppers and began to remove the stems and seeds. I never even made it to the chop phase before my eyes burned and my lungs prepared to explode. There’s little ventilation in vintage rail cars but, once again, the pepper gods obliged and no one else was onboard. It took several trips to the vestibule for fresh air and lots of handwashing before I recovered and the residual chile oil was no longer lingering on my fingers (the sauce by the way, was delicious and the guests were no wiser to the previous day’s calamity).

Once I got to Chicago for my latest adventure, I placed an order with Whole Foods for lots of fresh produce and staples I would need for cooking in the coming weeks. Coming from the limited resources I had experienced the past few weeks, I went kind of crazy, ordering myriad peppers, like finger peppers and Fresno peppers. I didn’t order any super-hot, small varieties, like Thai or ghost peppers, though once I started chopping, the old, familiar stinging eyes and respiratory distress hit me like bygone days in the train galley.

This time, however, I had an “Aha!” moment. It turns out that COVID-19 face masks and rubber gloves are a great remedy for capsaicin vapors. I’ve set aside a couple sets of masks and gloves for future pepper projects.

The smaller the pepper, it seems, the more pungent. So, beware when you’re handling the little guys: they pack a powerful, peppered punch. But they’re really great for adding lots of heat to curries and soups and other fiery Asian-style dishes.

For peppers that are zesty and tasty but offer less heat, my favorites are poblanos and jalapenos. Charred poblanos are perfect for chiles rellenos or rajas (roasted strips of the peppers) and jalapenos are delicious pickled, or sliced and sautéd, then finished with sea salt. Both versions are a nice complement to most anything dished up on your plate, including this tasty chile rellenos recipe! Mask and gloves not required. 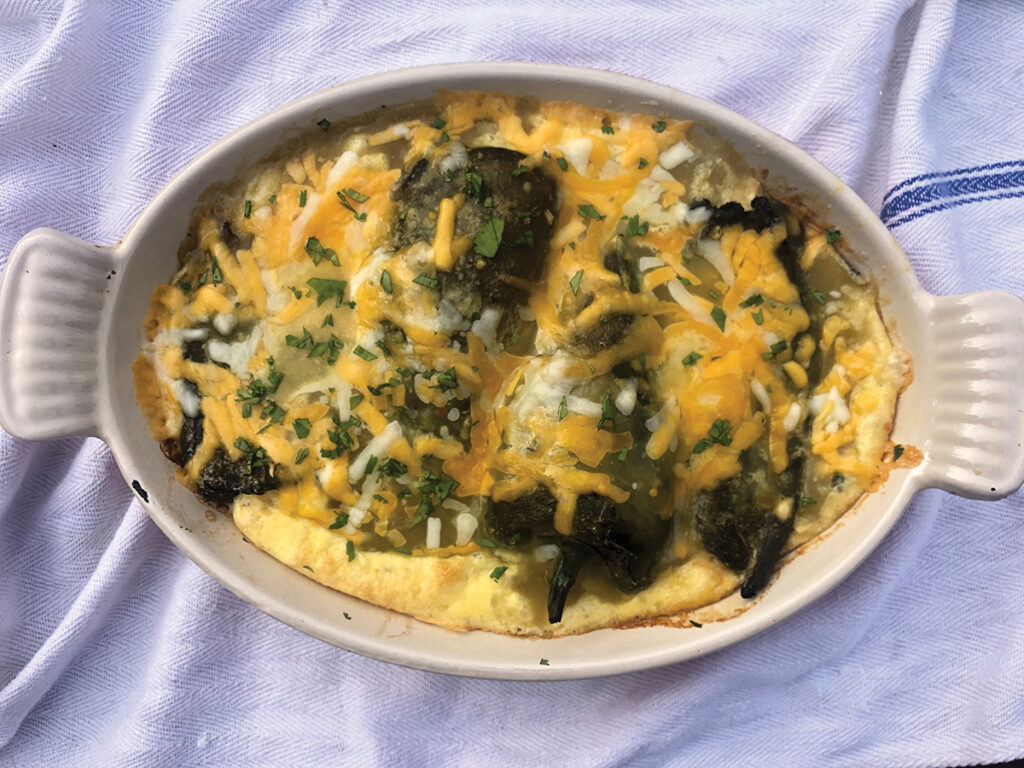 Serves four — recipe easily doubles. Cut cheese into sticks, rather than grating; it’s easier to stuff the peppers. Sometimes, I wrapped thin Spanish ham around the cheese before stuffing into peppers. It you want more kick, leave the seeds in the peppers

Easy dish that travels well to the backyard for brunch.

Roast the poblanos over an open flame or under the broiler until charred all over, turning as necessary, about 8 minutes.

Put in a bowl and cover with plastic wrap to steam and loosen the skin, about 5 minutes. When cooled, remove the stems and run under cold water to peel off the blackened outer skin and remove the seeds.

Preheat the oven to 350 degrees F.

Put 1 piece Jack cheese in the center of each pepper. Pour half of enchilada sauce into an 8-inch square baking dish. Put the cheese-filled peppers on top of the enchilada sauce.

Separate eggs, beat whites between frothy and stiff. Set aside. Beat yolks until thick, whisk in the cheddar, milk, flour and baking powder. Fold in the whites. Gently pour the mixture over the peppers and sauce in the baking dish.

Bake until the casserole is set in the center and golden brown all over, about 45 minutes. Let rest for 5 minutes. Heat remaining sauce and pour peppers. Garnish with fried jalapenos and chopped cilantro. Serve warm.