More than 100 Sandpoint High School students walked out of their classrooms and outside into the early spring drizzle Wednesday morning, joining thousands of their peers across the United States. 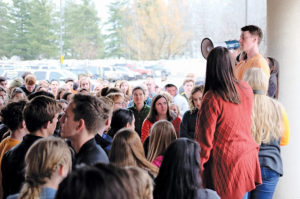 Senior Dutton Rogers speaks to participants in Wednesday’s walkout at SHS. Photo by Will Harrison.

The demonstration honoring victims of school shootings was a call to action for students who were mostly too young to vote yet old and aware enough to make their voices heard. High school senior Dutt Rogers, speaking over a megaphone, encouraged his classmates to write letters to their legislators and have conversations with those of differing opinions.

“As we’ve seen over the last month, students do make a difference,” he said.

The local student organizers follow in the footsteps of Stoneman Douglas High School youths who survived last month’s shooting that claimed 17 lives. In the weeks following the shooting, the students became visible and effective advocates for government action on gun violence.

The effectiveness of student voices on the controversial issue is not lost on Sandpoint High School senior Emma Reed, another walkout organizer.

“I think it’s important for kids’ voices today to be heard,” she said. “It’s really depressing that we have to be the voices to advocate against gun violence.” 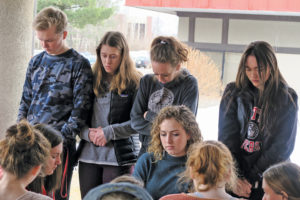 Students observe two minutes of silence to honor the victims of the Parkland school shooting. Photo by Ben Olson.

“My generation has had too many school shootings to be quiet about it anymore,” she added.

Neither Rogers nor Reed thought much of the Trump Administration and NRA proposal to arm teachers in classrooms.

“Most teachers teach because they love helping students learn and grow and have no desire to carry a gun around and potentially be asked to use it to possibly shoot one of their own students,” said Rogers.

“Arming teachers sounds good on paper, but there are so many ways it could go wrong,” added Reed. “… My mom, who is in law enforcement, goes through so many hours of education and training just to handle a weapon.”

As with the Stoneman Douglas High School students, local demonstrators faced criticism from adults who attacked their young age and questioned their credibility to participate in a national debate. Reed pushed back against those attacks.

“We still have the First Amendment, the right to express our opinions,” she said. “Let the adults handle it? Obviously the adults aren’t handling it. There have been school shootings every week since the beginning of 2018. This shouldn’t be the new normal.”

Students who participated in the walkout, which accounted for about 10 percent of SHS’s 1,000-strong student body, held a variety of beliefs on gun control, according to organizer Ben Robinson.

“There are many different beliefs and reasons that students participated in this, but the main reason is to honor the victims of the Parkland shooting,” Robinson, a junior, said. “We contacted the Reader and the Bee so we could show the community that us students regard (these school shootings) as a problem.”

Other students chose to abstain from the walkout for their own reasons. One such student is senior Thomas Riley.

“The walkout was to pay respects to the 17 students that were victims to the Parkland shooting,” he said. “However, many students have turned it into a political stance, and I don’t stand behind the disrespect.”

He also believes there is some merit to the idea of having armed teachers or guards within a school. 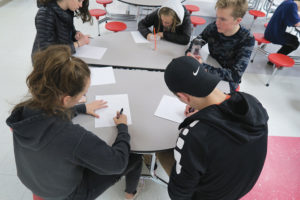 Some students used the walkout time to pen letters to Idaho legislators about gun safety. Photo by Ben Olson.

“I believe certain individuals and teachers should be able to carry firearms, because it can play a key role in the protection of students,” he said. “Recently in Georgia, an armed student resource officer was able to hold an armed individual to a classroom standoff protecting students.”

Riley, Reed and Rogers all agree that Sandpoint High School handled the walkouts appropriately by staying neutral. According to SHS Principal Tom Albertson, the school will stick to its normal policy of marking students who aren’t in class as absent. If they are only gone for a short time, that absence will be changed to a tardy.

“Students don’t necessarily give up their First Amendment rights when they walk through school doors, but they are expected to follow rules so the education process proceeds without interruption,” he said.

Even so, he said he approves of students involving themselves in civic action.

“Student voice is always a good thing,” he said.

Sandpoint High School wasn’t the only local school to see walkout activity. Michael Bigley, a teacher at Forrest Bird Charter School, said about a dozen students from the high school and 25 students from the middle school walked out of class. And according to Washington Elementary sixth-grader Noah Bedarczyk, he and his two friends were the only ones to walk out of class. He also wrote a letter to Idaho Congressmen asking for action on gun violence.

“We should do background checks on the people purchasing guns, and they can’t have a criminal record or mental health issues,” he said.