On June 10, just like the second Friday in every June, several hundred people trickled into a Banff parking lot for a small gathering. They were ultra bikepackers and cycling fans, trekking in from around the world with bags full of granola bars, bivy sacks and butt cream. In the chilly, nerve-ridden gathering, stories were tossed about by fidgety riders, trying to calm butterflies and kill the slow minutes until 8:00 a.m.

A lot of the spandex-wearers had been here before, and many of their stories were about “that time.” As in, that time someone woke up groggily in the dawn light next to his bike, with his half-eaten fried chicken laying on his chest, and a grizzly bear standing next to him hungrily. That day she got hypothermia—for the second time—and had a random stranger peel her from her bike, wrap her in blankets, and thaw her out while her clothes were thrown in a dryer. That midnight hour he spent pressed flat in the Colorado sage brush, hoping the truck lights scanning the field for him wouldn’t see his bike handle and start spraying the area with gunfire. 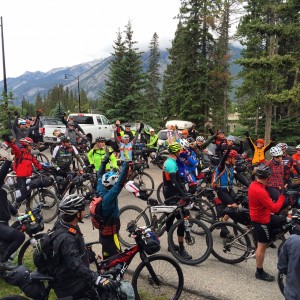 The 160 riders give one last round of cheers before Banff-departing riders hit the long trail to Mexico. Photo by Hannah Tranberg.

In the world of difficult bike races, there’s a couple of tiers of sanity. There’s the joy rides; there’s media-pleasers like the Tour de France; and then, there’s races that no person in their right mind should even trace on a map. Cue the Tour Divide—the craziest race you’ve never heard of.

The Tour Divide follows the world’s longest off-pavement cycling route down the Continental Divide—up single-track and down jeep trails; winding through gravel roads, or puttering along old railroad beds. Participants ride 2,745 miles from Banff to the U.S.-Mexico border, with over 170,000 feet of climbing and absolutely no outside support.

While any person can ride the trail with a GPS tracker at any point during the summer to participate, the majority of riders choose to ride from one of the Grand Départs. The group departures take place at the opposite ends of the route in the second weekend of June—Banff, Alberta and Antelope Wells, NM. Having a pack of similarly crazy people eager to ride near you (and being able to ride during June’s maximum daylight hours) makes the long haul much more interesting.

What does it mean to ride an unsupported race with an elite group of cyclists? It means, if you want to keep up with the “pack,” you’d better be able to pull off about 140 miles of riding a day; and, if you want to win this thing, you’d better set your sights closer to 200 miles per day. It means you can choose to sleep in a hotel, or in a ditch on the side of the road—whatever suits you, and whichever’s available when your legs stop moving. It means you get to carry as much food as you can fit on your bike, and when you run out, if there’s a town, you can use your credit card to buy more (If there isn’t, you’re going to be hungry for a while).

There’s no pit crew, and there’s little encouragement of any outside help. In the past, some participants have gotten flak over getting too many smart phone tips and phone calls from family and friends. The forecasted winner of this year’s race, Mike Hall, is riding completely without a phone so he can focus on fast times. Most of the other top tier riders only use theirs once every few days to touch base with loved ones.

All that being said, no one’s riding alone. There are occasional Tour Divide “angels” along the route—people who live and work along the Divide, who watch for cyclists and take photos for worried family members. Angels pop up in a number of riders’ stories, maybe by serving an exhausted cyclist a warm meal hours after a restaurant closed, or fetching an essential piece of gear that a rider accidentally dropped along the trail.

Probably the most famous fan of the TD is a Banff resident affectionately known as “Crazy Larry.” Last week he was out in full style, carrying a small camera and interviewing as many riders as he could reach, and giving out balloon animals to riders he recognized. In an unwritten tradition, Crazy Larry has adopted the honor of leading the Banff Grand Départ from the YWCA to the trailhead for the race’s rolling start. Each year, as the race grows in recognition and in attendence, this grows into an ever-larger bicycle parade. On Friday, close to 170 bicycles pulled out of the parking lot behind his colorful bike, blaring the “Rocky” theme, headed towards a new collection of ludicrous stories.

As life gets increasingly comfortable in these United States, and around the world, sporting events seem to be growing increasingly extreme. The pioneers who bushwacked their way across our mountains the first time would probably have a hard time believing that, less than 300 years later, people would be willingly facing down grizzlies without guns and charging up and down mountain roads on spindly bits of metal and rubber (then again, they would probably be in awe of our gas station convenience stores as well).

Are our lives too easy, that we now seek out such thrills? Or are longer races like this even about a thrill at all? Hard to say. Conversations with veteran TD riders are always a little unpredictable, but their enthusiasm for the long, slow slog of the race is surprisingly consistent, and seems to move beyond temporary highs into other themes—the love of being alone; the desire to be surrounded by untouched natural beauty; a promise made to oneself, or a loved one.

Whatever gets a cyclist into the race initially, once someone’s caught “the bug,” it’s not uncommon to see a rider show up at three, four, even five Tour Divides. Maybe they’ll tweak it a little bit—this year, they’re on a tandem bike with their spouse; the next year, they bike it NoBo (northbound) to mix things up. It’s worth remembering, too, that it often takes a couple of tries to get a finish under one’s belt—the TD only has a 50-60% finishing rate due to the high rate of injuries, mechanical failure and wandering off-route.

Whether they complete the race or not, time and time again the riders return. They stalk the online forums, and they show up at popular pit stops with cameras and cheery greetings. Non-racing veterans ride out to check on racers when their GPS trackers stop moving down the map, to make sure all’s well. In off season, TD riders frequent the places that fed them and housed them, particularly the infamous string of cheerful bakeries in Pie Town, NM. With all this positive energy, the Tour Divide has acquired the feeling of a large, eccentric family (albeit a family with several unhealthy obsessions).

While preparing for this year’s race (and his third time down the continent’s spine), last year’s winner Josh Kato mused at length on his blog about what it is that keeps him coming back. Ultimately, he said, “The times I was having the most fun were the times I was going the fastest. Riding your bike is easy. Everything else is hard.” (faroutwanderings.blogspot.com)

In other words, at the end of the day, we may as well toss deep philosophical discussions aside. The Tour Divide is just a lot of people united in the common goal of riding their bikes, to the best of their own individual limits, one difficult pedal turn at a time.

Want to follow this year’s race? Now that we’re a week in, the action is starting to heat up. You can watch the SPOT markers move slowly down the Rockies at https://trackleaders.com/tourdivide16