Though I’ve been gone for nearly 30 years, this time of year makes me wax nostalgic for the rituals of my former ranch life. Back then, at first light on the coldest days, the ranch hands would bundle up and head out to the fleet of frozen trucks and tractors to prime the engines. They called the exercise “spray and pray”: a little spray of (highly flammable) ether to coax the engine, and a prayer that the engine would turn over rather than erupt into flames. Once the morning prayers were answered and the vehicles were idling, the cold and hungry hands would head down to my kitchen for a hot and hearty breakfast before heading out to feed the herd of cows, who were equally cold and hungry.

They’d huddle around the kitchen, sharing hot coffee and good-natured ribbing, waiting for me to place heaping platters of French toast or pancakes with links of sausage or rashers of bacon before them. Once they cleaned their plates and filled their stainless Stanley thermoses to the brim with coffee, they’d head back to the tractors and begin the daily routine of stacking hay and driving it out on the frozen meadows, then pitching it off to the hungry, Hereford-crossed cows.

Occasionally, as a morale booster on the coldest of mornings, I’d serve up hungry man-sized steaks, basted eggs and crispy fried potatoes. We didn’t operate a feedlot and sold our calves in the fall, so, ironically for a cattle ranch with 1,000 mother cows, beef wasn’t as abundant as you’d imagine. Twice a year we‘d choose a couple of nice young steer calves and set them up for a good yet short life filled with lots of protein pellets and cracked corn before they were loaded up and hauled to Ranchland Processing, in Butte, Mont. Then I’d wait for the call to come and get my carefully wrapped and frozen supply of beef.

More than once, just days away from this biannual journey, while visions of bone-in ribeye steaks danced in my head, some old cow would find her way to some unrevivable catastrophe (if you have ever depended on Mother Nature for your livelihood, you know exactly what I am talking about). Cows love to slip on ice, fall into rivers and wedge themselves into very small spaces from which there is no exit.

The next course of action was to shoot, bleed and dress-out the old girl before hauling her to Ranchland. These poor bovines were never grilling-steak quality, but, doctored up with a little extra suet, they made fine hamburger, along with roasts and ribs that were tasty enough after a long day of oven braising. Secretly, I’m sure my husband was pleased with a fattened steer to add to the ledgers, while I had one more damned old cow to stew about.

Cuts of meat have changed a lot since then. Chuck roasts, seven-bone roasts (shaped like a number seven, not seven bones) and bottom rounds have been recut and labeled as tri-tips and flat iron steaks. The “caviar cut” of beef is no longer considered the tenderloin. Now it’s the “spinalis,” also known as the cap of the ribeye.

My favorite cuts of meat come on the bone. As much as I love a bone-in ribeye or a porterhouse, I’m equally as happy with short ribs. Even before my ranch days, I remember my mom bringing them home from the butcher by the bagful. She’d shake them up in a brown paper bag, to which she’d added a little scoop of flour and salt and pepper, then drop them into her electric frying pan to sizzle in hot bacon grease. After they were brown and crispy on all sides, she’d add some finely chopped vegetables and boiling water from the tea kettle, then leave them to simmer for hours. She served them, falling off the bone, in a rich and savory broth, ladled over wide egg noodles.

For many years, short ribs along with organ meats, oxtails and marrow bones were considered cheap cuts, but not any longer. I remember being reintroduced to short ribs as an entrée choice, served over polenta, about 15 years ago on a first-class flight from New York to Shannon, Ireland. They were nearly as good as my mother’s, and I decided if they were good enough for international first-class service, I would start cooking them again — this time for my private rail car-owning clientele.

I remember the sticker shock of paying more than $12 a pound when I purchased a batch from a Chicago butcher (at the now defunct Fox & Obel) for an important client’s trip. They were a big hit and became a menu choice on every luxury rail car we operated on the back of Amtrak’s California Zephyr between Chicago and Oakland, Calif.

It seems their popularity isn’t waning, either. You can braise, stew or sous-vide this versatile cut of beef and serve over rice, polenta, noodles or potatoes. Off the bone, you can tuck the meat into sandwiches or ravioli, or serve shredded atop benedicts or poutine.

My favorite is still the classic seared and braised method my mother knew best. I continue to honor her — mine are always served over wide egg noodles.

They’re done when the meat nearly falls from the bone. Serve in a large, shallow bowl, over rice, polenta, potatoes or noodles. Expect no leftovers. 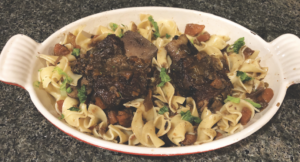 Preheat oven to 325 degrees Fahrenheit. Sprinkle short ribs with flour, salt and pepper. Heat oil and butter in a large Dutch oven over medium-high heat. Working in 2 batches, brown short ribs on all sides, until edges are crispy. Transfer short ribs to a rimmed plate.

Add onions, carrots and celery to pot and cook over medium-high heat, stirring often, until onions are browned, about 5 minutes. Add mushrooms and garlic and stir until soft. Stir in bay leaves, wine and stock, then add short ribs with any juice from the plate. Bring to a low boil. Lower the heat to medium, cover and transfer to oven.

Cook until short ribs are tender, 2-3 hours. With tongs, transfer short ribs to a platter. Ladle any fat from surface of sauce and discard; season sauce to taste with salt and pepper. Serve in a large shallow bowl, with sauce poured over wide egg noodles (or starch of choice). Top with short ribs and garnish with chopped, flat parsley.