The Sandpoint Eater: Christmas in her kitchen

Last December, after making povitica (an Eastern European nut-roll pastry that was a traditional recipe from my youth), I wrote about it in my Christmas column and posted photos on Facebook. I received a deluge of recipe requests and a multitude of comments, especially from readers wanting to share their own memories. A month later, the post was still receiving activity from povitica lovers.

A couple of weeks ago, I spent an entire day making Cornish pasties, another family favorite. Again, I posted photos, along with a short story, to a couple of Facebook foodie groups and those posts elicited even more recipe requests and poignant comments than the prior year’s povitica. Anecdotal memories flooded the posts. Nearly anyone who’s ever made (or eaten) a pasty weighed in. I’d say we have a lot to say about food and our memories of cooking.

By the time I was 10 years old I had lived in as many houses, and, though I can barely remember most of those homes, the flash of fleeting memories almost always revolves around the kitchens. Many others tell me that holds true for them as well, and so it seems we gather best when it involves food.

These holiday kitchen recollections are stirred up every time we seek out our annual Christmas cookies recipes. You might lovingly remember your apron-clad grandmother, wiping her flour-dusted fingers on a hand-stitched towel before offering you a delicious and fragrant, warm-from-the-oven cookie.

When I was young, I yearned for the soft-spoken, gingham-clad grandmother like the ones I’d glimpsed on our black-and-white TV. Instead, my “Gram” always seemed to be pouring the last cup of coffee from an overworked percolator and taking long, hard drags from her morning Salem (she switched to Pall Malls with her evening whiskey). Our Formica-topped table was filled with overflowing ashtrays and ever-present decks of canasta cards. Often, I was embarrassed by this less-than-Norman Rockwell scene and cringed when a friend came by unannounced, catching a peek of my unorthodox grandmother, Irma.

Sadly, at that time, I couldn’t see beyond the ashtrays. Because if I had, I would have paid more attention to the women gathered in these kitchens. It wasn’t only coffee and cigarettes they shared but most likely wisdom, encouragement and even a secret or two while baking dozens of cookies, neatly piled on flattened, brown grocery bags on the far side of the table. There are times I long for the laughter of these women and the collage of their personalities that helped paint the portrait of my life.

As I grew older, I found my way into the holiday kitchens of friends, lovers and relatives. More than once, my host would roll their eyes and gesture toward their own unorthodox matriarch.

At a cousin’s home, her Ukranian babusya taught us to make holubtsi-savory cabbage rolls, served at midnight on Christmas Eve after a long fast (which the youngest generation completely ignored, with trips to a drive-in burger joint). At my childhood friend Irene’s (who’s home and German immigrant mother did belong in a Norman Rockwell print), I learned to roll dough, no bigger than an acorn, for pfeffernüsse cookies.

On a trip to Rockford, Ill., I met my boyfriend Mike’s multi-cultural family, starting with his tiny frail Swedish grandmother who plied me with homemade gløgg (producing a hangover that lingered for days). His Italian nonna’s kitchen was always filled with simmering pots of sauces and jelly glasses full of homemade red wine. From her broken English, I learned of the Feast of the Seven Fishes (La Vigilia), celebrated in her native Sicily with dishes, in my opinion, that were much tastier than the Ukranian holubtsi.

I’ve spent nearly 20 years in the same home now. My children, who’ve grown more tolerant of their own mother, gravitate toward the kitchen as soon as they arrive. There are also many grandchildren with much to learn: how to roll dough into acorn-sized balls and how to stack cooling cookies into long, neat rows.

Maybe next time they come, I’ll tell them about Nonna’s seafood linguine arrabbiata, served on Christmas Eve. It was the most exotic concoction I had ever tasted, loaded with fresh sardines. I was wary of a sardine that didn’t come from a can but was able to wash them down with many a juice glass of red wine.

It’s a perfect dish for hungry eaters at holiday tables. I long ago left the sardines out of my version. Here’s to Christmas! I hope yours is memorable and merry.

Add a little salad and bread and lots of red wine. Sometimes, for variation, I drizzle with additional olive oil and crispy fried pancetta. 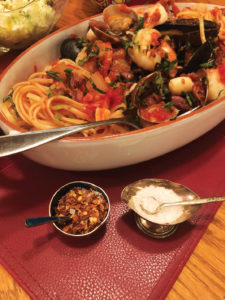 • 6 oz each: cleaned mussels and

Add tomato mixture to pasta, then add seafood. With tongs, toss pasta until well coated with sauce. Top with capers and basil.