It may be just another cold Wednesday in Sandpoint, but in the basement of the Gardenia Center it is feast day — for some, a celebration. Free hot soup with a fresh slice of fresh bread, hot drink and a dessert, served with compassion and joy. 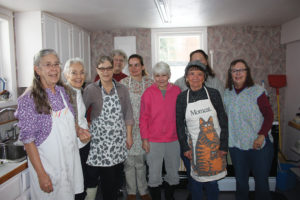 Around 9 a.m., Paddy Ragen can be found washing pots and pans. Ragen, the homeless liaison, volunteers about eight hours a week providing and connecting people with services. She said the Gardenia Center typically serves the working poor and people with disabilities — people living on the street or otherwise without a fixed address do not typically ask for their services.

The Gardenia Center (located at 400 Church St., next to the post office in downtown Sandpoint) serves about 80 people every Wednesday as part of a network of charities that serve hot meals daily in Sandpoint.

A minimum of five volunteers make the soup kitchen happen each week. Aside from originator Jim Brown, who is said to do “anything and everything that needs done,” the volunteers are all women.

By 10 a.m., the servers are actively setting up lunch. A plethora of inviting smells leads the guests downstairs where there are six crock pots filled with six simmering homemade soups. Carla Cook, one of the founders of the soup kitchen during the economic crash 11 years ago, brings fresh bread, “a brown loaf and a white loaf,” and serves them cut in a basket.

Caren Reiner has made and served soup at the Gardenia Center for nearly a decade. Like all of the soup makers, Reiner fixes up around a gallon of soup at home from scratch (the Gardenia Center has no commercial kitchen), but her soup is uniquely vegetarian while most of the other soups include meat. To Reiner, the integrity of serving a soup she believes in is more important than minimizing cost.

“Most people wouldn’t know if it’s organic or not, but I would,” she said.

Reiner’s recipes are dependent on the season, what is available and what organic ingredients are on sale. Sometimes an abundant harvest from Reiner’s garden decides the soup that week. She spends about $15 on each gallon batch of soup and three to four hours of labor each Tuesday prior. The time Reiner spends serving and cleaning on Wednesdays, in addition to the soup labor, totals more than 30 hours and $60 of her own money every month.

Sacrifices included, Reiner said Wednesdays are the “highlight” of her week — her fellow volunteers are her favorite social circle and the gratitude she receives from those in need always inspires another batch of soup.

At 11 a.m., dozens of community members begin loading their trays with hot soup, coffee, fresh bread and a piece of cake. There is merriment in the guests’ conversations. They are served much more than just great food.

“When someone needs a hug we give one,” said Reiner.

People often ask how the Gardenia Center funds its soup kitchen. The volunteers themselves, the “grandma goddess angels,” as John Conner calls them, are supplying the needs of the community. 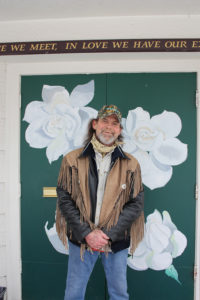 Conner said the Gardenia Center has served him “beyond belief”. He is a regular soup patron and Alcohol Anonymous attendant at this location. Photo by Jodi Rawson.

“They have served me beyond belief. It is always good to have food in my belly,” Conner said. “These grandma-goddess angels go above and beyond. When I have a chance, I bring extra food for them, or clothes, and this is a great center for that. I am fortunate — a recovering alcoholic — and the Gardenia Center has shown me a better way. Anything I can do to help, like shovel walkways or set up tables, I do. I am here every morning for a meeting [of Alcoholics Anonymous] and every evening when they have one.”

Marilyn Chambers, at nearly 88 years, has owned the building for more than three decades and said it has been through many changes. Originally, the Gardenia Center was opened as a meditation center but has grown to a hub of helpfulness.

“People are wonderful,” Chambers said, and “we are here to help.”

“Sometimes people show up in rags and they don’t have anything. We have even found people hiding in the building — not that they were doing anything wrong, but staying out of the cold,” she added. “We have had many meetings about how to help and it always works out, though we started with practically nothing.”