It’s hard to stress how extensively critics have lost their damn minds over Parasite, the South Korean-language film from iconic-director-in-the-making Bong Joon-ho. Released in 2019, the darkly comedic thriller prompted an eight-minute standing ovation at the Palme d’Or at the Cannes Film Festival (which it won), and has racked up a mind-blowing 194 major international award nominations — winning 170 of them. 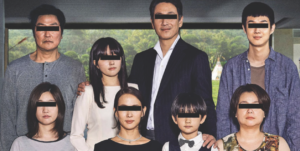 For American audiences, that includes a Best Foreign Language Film win at the 2020 Golden Globes on top of nominations for Best Director and Best Screenplay — a double honor for Bong, who directed, penned the story and co-wrote the screenplay. Even more stunning, Parasite is among the extremely rare non-English films to receive an Oscar nod for Best Picture, one of six nominations including Best Achievement in Directing, Best Original Screenplay, Best International Feature Film, Best Achievement in Production Design and Best Achievement in Film Editing. If Parasite takes Best Picture at the awards show on Sunday, Feb. 9, it’ll be the first “foreign” film to do so.

But who really cares about the awards show-industrial complex? Bong sure doesn’t, describing the Oscars as “very local.” On the strength of his previous much-lauded efforts, including The Host, Snowpiercer and Okja, Bong is already drawing comparisons to Hitchcock. Vanity Fair credits him with “changing how Hollywood thinks” (thank God for that; someone needs to bash the sequel-remake-franchise-Marvelization mania out of Tinseltown’s half-atrophied brains).

Turns out cinephiles both professional and otherwise are more than willing to have their thinking changed: Parasite earns a 99% “fresh” rating from critics and 93% from audiences. IMDb gives it 8.6 stars out of 10. Metacritic rolled out its “universal acclaim” and “must-see” honorifics to accompany its rating of 96 out of 100. Rogerebert.com maxed out its four-star rating system; evoked the word “masterpiece” in its review; promised that “Parasite is unquestionably one of the best films of the year”; and, if Roger Ebert and Gene Siskel were still alive, it’s likely they’d raise all four of their collective thumbs then drive to your house and enlist yours, too.

In the meantime, try your best to avoid spoilers. Amid its gushing, awe-struck review, filmschoolrejects.com issued a dire warning that Parasite is so phenomenally great that the less you know about it going into the theater, the better. That’s a tough injunction to follow — especially for a reviewer who hasn’t yet seen the film. Carefully adhering to the frequent and prominently displayed “spoiler warnings” signposted all over the vast country of online praise for Parasite, we feel confident in describing a few rudimentary plot elements.

The film is broadly about a poor South Korean family that somehow lucks into an opportunity to break into the world of the wealthy by running a tutoring scam on another family that happens to be among the mega rich. We’re tempted to say “hilarity ensues,” but by all accounts that’s not the half of this tale of toxic symbiosis. Most synopses of the film underscore its profound, scathing indictment of wealth inequality, classism and the viciously evil banality of capitalist society in the deranged post-industrial “First World.”

Generational politics come into play, too, as The Guardian writes: “That Bong’s film also neatly taps into a global well of class outrage … has given it universal resonance for socially conscious young audiences, hungry for texts to feed their haves-versus-have-nots discourse amid global political disarray: Parasite’s class-based sympathies might be multi-generational, but it still cuts close to the bone for the ‘OK boomer’ crowd.”

Considering how deeply anxieties over climate change, wealth disparity, rising nationalism and technology-driven social disintegration have penetrated culture throughout the world’s developed economies, it’s perhaps unsurprising that Parasite’s themes would find ready audiences among those who are simultaneously freaked out at the state of the world and seek release from those tensions by laughing up their sleeve at the gross absurdity of it all. Class this reviewer among them.