The Sandpoint Eater: Of meals and memories

Like it was yesterday, I can still recall the cocoa-brown dress, with candy-pink piping, that I wore for my first “real” restaurant experience. The occasion was my eighth birthday. After his short lived and ill-fated job in Texas, my father packed us up and we headed back to our beloved Montana. We were living sparsely, awaiting the arrival of our belongings, when our duplex landlord, who lived upstairs, discovered it was my birthday. To commemorate, he took me, along with his own young daughter, Joyce, out to dinner. My previous restaurant experiences had been few, all involving an “extra plate,” of whatever my parents and two older sisters parceled onto my waiting dish. So that bigger-than- life menu, placed in my young hands, was a novel and exciting experience.

“Have anything you want,” encouraged my generous benefactor, Jack Holmes.  It didn’t take me long to choose the most exotic-sounding entree on the menu, “Half a Spring Fried Chicken.” The words rolled right off my tongue as I placed my order with the big-haired, pink-uniformed waitress.  The night only got better when I was encouraged to choose my own beverage. Never was a cherry-topped Shirley Temple more relished. I don’t remember the side dishes, but I recall polishing off every single bite and bit of that juicy, crispy-skinned chicken.

I’ve moved at least a dozen times, downsizing many times along the way — but, tucked away with other prized ephemera, lives that faded beverage napkin from Jorgenson’s Holiday Inn, in Helena, Mont. (still going strong, and run by the same family). No trip “home” is complete without stopping in.

Oldest daughter Ryanne accuses me of planning trips around restaurants. While that’s just not true, I am a big fan of enhancing my travels with memorable dining experiences. I just returned from an epic train journey with two grandsons, and we headed straight to one of my favorite old haunts, the Italian Village, the oldest Italian restaurant in Chicago. We sat at the same dimly-lit booth where, 20-some years ago, I took daughter Casey and her constant, childhood train-companion, Alana. There they sampled squid for the first time. I remember they stuffed themselves silly from the heaping platter of calamari tentacles and three orders of breadsticks. The food is still always delicious, and so are the memories.

A friend, former Sandpoint resident Terry Gainer, just released his first book, “When Trains Ruled the Rockies,” so this week, I’m headed to his launch party at the Banff train station. Humbled (and terrified) to have written the book’s forward, I can’t wait to be a small part of his big festivities. But truth be known, I’m nearly as excited to share my favorite Banff eatery, the Grizzly Fondue House, with a trio of grandkids.  It’s an iconic eatery that’s been a Banff landmark for years. I discovered their cheese fondue on my first visit, nearly 40 years ago, and throughout my years of operating a tour train, I was there at least twice a year, often with kids or colleagues in tow. Though the original owner, Peter, has passed away, his heirs still serve up every kind of fondue imaginable. My all-time favorite remains the pot of bubbly Neuchâtel cheese, served with cubed French bread.

Maybe it’s all the recent memory-lane meals I’ve been thinking about, but I’ve also spent a lot of time musing about other favorite restaurants, especially our own: Trinity at City Beach. I can’t begin to count the all the special meals I’ve savored there, but they have been many, and often marked a birthday, anniversary or other lifetime achievement. At the first sign of summer, we swarm to the coveted umbrella-topped tables for drinks on the deck, celebration libations for family, friends and self. When the little ones are in tow, I reserve the deck table near the railing so we adults can enjoy a beverage within earshot and eyesight of the children, romping sandy-footed at lake’s edge. I’ve taken up my share of and time and table in the lounge too, meeting-or making friends, for fun conversations, or debating local, hot topics over cold drinks, served up by familiar bartenders, or even the omni-present proprietor, Justin Dick.

I’m a creature of habit, and once I discover an epicurean treasure on a menu, I am hard pressed to try something new. My lunchtime favorite at Trinity is the TCB cobb salad, and though I may mix it up a bit for dinner, it always starts with either the savory corn & crawfish chowder or the TCB grilled Caesar. That grilled Caesar gets me at the first bite.

Don’t be a stranger to Trinity at City Beach this summer. Get down there for a meal, and make a memory or two of your own. Maybe you can even talk Justin out of his recipe for the crawfish chowder (it’s on my to-do list).  Meanwhile, here’s a recipe for another favorite summer chowder of mine! 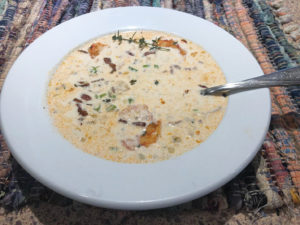 I love to make this is summer, when fresh corn is at its peak. Serve up with a side salad and French bread (and don’t forget the chilled white wine).

• Salt and pepper, to taste

In a large pot or Dutch oven over medium heat, fry the bacon pieces until crispy. Transfer to a plate lined with paper towels. Drain off fat from pot, leaving enough to coat bottom of pan.

Add shrimp to the pot and cook until pink (about 3-4 minutes), stirring frequently. Remove shrimp with a slotted spoon and add to the plate with the bacon.

Add onions and garlic and celery.  Sauté for about 3 minutes, or until soft and translucent.

Add the shrimp, stir and ladle into bowls.