Rising in the bread biz

The first bread Heidi Dinning ever made was in the fourth grade in Sandpoint, when her class learned what happens when you combine yeast, flour, salt and sugar, butter and warm water in a resealable plastic bag. That project, which of course involved some oven baking, was once a staple of early-elementary education in Bonner County and it stuck with Dinning. 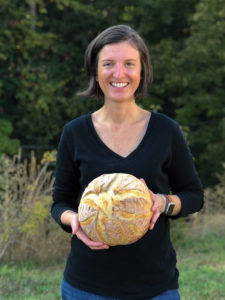 Heidi Dinning stands with one of her picture perfect loaves of sourdough. Courtesy photo.

“That was the first time I remember making bread. I have always baked bread since then and I used that same recipe for ages,” she said.

Almost 30 years later, Dinning is still baking — more so than ever since February, when she almost by accident founded her one-person bakery, Heidi’s Bread, which operates out of her kitchen in Bonners Ferry.

At first, it was all for fun and rooted in a desire for really good sourdough. Dinning was searching for just the right recipe and found her starting place in a cookbook written by a baker she follows on Instagram. That crust was too hard, though, so she started experimenting.

Her experimentation and hard work was to the benefit of her friends and family, though, as they received a steady supply of her practice loaves. It turned out Heidi’s Bread was good. Really good. So much so, that her bread recipients started to turn into customers.

“I didn’t think people would buy it,” she said, though her husband, Boundary County Middle School Principal Kevin Dinning, kept telling her they would.

Turns out he was onto something — as was she.

“I started making sourdough in February, and in June it was like a real business,” Dinning said. “It was a lot faster than I thought it would be.”

Today, Dinning keeps baker’s hours, rising as early as 3 a.m. on Mondays and Tuesdays to add flour and water to the dough prepared on Sundays, then knead and knead and knead.

She does everything by hand, kneading in batches of six or seven loaves, which takes between 15 and 20 minutes per batch.

“I count it as my workout,” Dinning said.

After letting the dough rise and rest, she bakes all day Tuesdays, typically turning out around 20 loaves, which will sell for $8 each. In the meantime, she breaks to pack lunches for her kids — a 5-year-old daughter and 2-year-old son — and get them to kindergarten and preschool/daycare, respectively.

“For her lunch, [my daughter] always wants mom bread for her sandwich: turkey and spinach and cheese and mayonnaise and mom bread. She’s a weird child. If I was her, I’d ask for cake,” Dinning said.

On Wednesdays, she hits the road, typically with her son as driving partner, for between 10 and 20 deliveries — about half in Bonners and half in Sandpoint, though she tends to have more stops in the latter. Each loaf comes wrapped in crisp white paper and tied up neatly with red-and-white-striped string. A tag provides order information.

The rest of the week is spent volunteering at her daughter’s school, spending some down time with her family and getting things prepped for another round of baking. It’s a schedule that works.

“From when I get up in the morning to when I’m baking, it’s usually like a 12- to 15-hour process. From when I start the dough the day before, it’s about a 24-hour process,” she said.

“It’s more than I thought but it’s also in the realm of what I’m willing to do. I definitely keep it on my terms.”

Dinning posts every week on Facebook (facebook.com/heidisbread) and Instagram (@heidisbread), where customers can leave comments or send a message to order their loaves. Delivery is available “within a reasonable area” of Sandpoint and throughout Bonners.

Though she laughs when she says “this is such an accident that I’m even doing this,” Dinning agrees that Heidi’s Bread is carrying on a multi-generational tradition. While her kids aren’t allowed to help — or even be in the kitchen — on commercial bread days, they do get to lend a hand when making bread for the family. It’s an experience that harkens back to her own childhood and the days of bread-in-a-bag.

“I remember my mom making bread for our lunches,” she said. “We grew up cooking together.”