Welcome to the Zombie Nest

LPO High School haunted house to raise funds for a trip to NYC and D.C.

When learning to create art with papier-mâché, most recall building piñatas in grade school. Randy Wilhelm’s art students at Lake Pend Oreille High School have taken the medium to a new level, using the medium to build gorey, awesome zombies with which to populate their Zombie Nest haunted house. 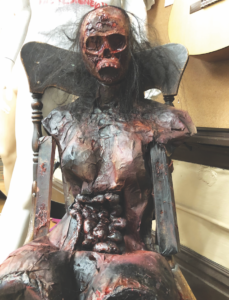 One of the zombies featured at the Zombie Nest, created by LPOHS student Amanda Baker. Courtesy photo.

Wilhelm said those creations, which students worked on all through September, will be on display as the Zombie Nest opens its doors Friday, Oct. 18.

“The kids have been working hard,” he said, “coming out after school working on it.”

Located in a donated trailer home beside the Hoot Owl Cafe in Ponderay, the Zombie Nest is a fundraiser for Wilhelm and six students to take a trip to Washington D.C. and New York City next summer.

“Wendy at the Hoot Owl has been phenomenal with her generosity to let us put it there,” Wilhelm said.

He said Idaho Forest Group donated lumber to help build a handicap-accessible ramp for the haunted house, and other community members have stepped in with materials to ensure the Zombie Nest could become a reality.

Wilhelm also said a key player in making sure students would be able to make the East Coast trip was local artist and longtime LPOHS volunteer Leata Judd. Wilhelm said that through all the hard work and stress it took to raise funds for the trip, Judd’s enthusiasm and donations of art kept him going. She passed away last month on Sept. 24 at 90 years old.

“If it hadn’t been for Leata, I would have pulled the plug on the whole idea,” Wilhelm said, “but she was just so motivated.”

Now, with about $2,000 left to raise before reaching their $12,000 goal, Wilhelm and his students hope the Zombie Nest will push their funding over the top. Those brave enough to enter the Zombie Nest pay a $5 admission fee while snacks and refreshments will also be available for purchase. Wilhelm is also seeking volunteer “live” zombies. He said he has plenty of makeup, but the wouldbe undead should come up with their own costumes.