How to listen to live music

A helpful primer on being a good audience member

If you’ve read the headline and thought, “Duh, you just listen to it, bro,” you’re missing the point. Furthermore, this article is probably going to be particularly beneficial to you.

Sandpoint’s live music scene ebbs and flows throughout the years. Right now, in my opinion, we are in a flow, with so many talented local bands playing at a variety of different venues scattered throughout North Idaho.

Some places are loud and boisterous, others cultivate a quieter “listening room” vibe.  Whatever the case may be, here are a handful of etiquette tips for those of you who frequent live music shows in Sandpoint.

If you come to talk, don’t sit at the table up front 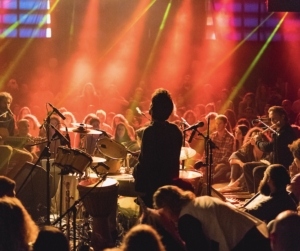 I get it, not everyone goes out intending to listen to live music. That’s fine. But, if you came out to meet with your crew and get caught up on the latest dish about Brad and Becky, maybe pick a table that isn’t right in front of the stage. You’d be surprised how much we musicians can actually hear. You’d also be correct in assuming we don’t exactly want to hear all that information about Brad and Becky.

Bantering can be great. Heckling? Not so much

Comedians have a rough job. There are actually people who attend comedy shows and think it’s part of the fun to heckle a comedian in the middle of their set. Luckily, most people don’t heckle a band when they’re on stage. But I have seen some questionable interactions over the years. When we were playing at Eichardt’s years ago, a former acquaintance of mine walked in the front door and saw I was on stage in the middle of a song. He leaned on the wall next to the stage and began conducting a conversation with me. I was so confused, since I was actually playing and singing during our “conversation.” You can yell out requests, shout something funny, voice your support of a song choice, but conversations and heckling should be saved for after the show.

It’s best to talk after a show instead of before

Sometimes bands have an hour or more to set up the stage and conduct a sound check. Sometimes it’s compressed into 20 minutes. Either way, it takes a bit of concentration to hook up all those cords and set the stage just right in a short amount of time. If I ever want to talk with a band, I’ll keep it to a simple hello before the show and save any in-depth conversation for afterward so they can concentrate on making the sound just right.

Don’t touch the instruments. Ever.

It happens quite often, actually. Someone will ask if they can bang on the drums or hold your guitar. Listen, most musicians are two steps away from poverty. Often their guitar or keyboard is the only expensive item they own, sometimes worth thousands of dollars. Just don’t ask, please. You can potentially endanger their source of income if you damage an instrument.

Don’t come onto the stage, please

If a band wants you on stage, they will ask you on stage. There’s a lot of equipment and cords laying around, so most of the time it’s a safety hazard. But it’s also super annoying when someone thinks they can just grab the mic or a tambourine and join the band. Don’t do it. Don’t be that guy.

This is probably the bane of every live band’s existence. Eventually, someone will yell “Free Bird!” at a show, as in they want you to play it. The joke needs to be retired.

Don’t forget to tip the band!