Let’s face it; it doesn’t get much better than eating a meal with ingredients that came from just around the corner. A new market café and bakery that recently opened in Sandpoint will give foodies an option to support local farmers in a tasty way.

Flourish, owned and operated by Vicki Reich and Marah Jacobs, has opened its doors at 301 Cedar Street. You can find it off of Third Avenue, behind the Pend d’Oreille Winery. Owners Vicki Reich, left, and Marah Jacobs, right, showing off a few of their yummy concoctions. Photo by Ben Olson.

Reich and Jacobs have made it their mission to provide customers with locally sourced ingredients at an affordable price. Featuring a bakery, market and café, Flourish is the product of over a year of effort on the part of Reich and Jacobs.

“We met while working at Winter Ridge Natural Foods,” said Reich of Jacobs. “What we wanted was to grow the local food economy in town.”

According to Reich, selling local produce and other regionally sourced items is a bit of an art form. Sometimes there are surpluses during high production seasons. Other times, during the cold months, there are not enough options to offer. The goal of Flourish is to provide a steady outlet for local produce and goods so that it may be offered year round.

“We use as many local and regional ingredients as we can,” said Reich. “All the beverages we sell are made locally or regionally. We use local meats, eggs, cream, yogurt. The produce all comes from growers in the region.”

There are not a lot of growers in the area who operate indoor greenhouses to create a year-round supply of produce. Reich and Jacobs are hoping that Flourish will establish itself as an outlet for these growers to expand their production.

“We’re especially interested in greens,” said Reich. “If there are any people out there growing stuff right now, we’d love to have them contact us.”

The menu is the brainchild of Jacobs, who has had a lot of experience working with vegan, gluten free and raw foods. Jacobs said it is always a fun challenge to come up with signature items that use fresh ingredients.

“It’s important to have a few menu items that are solid performers,” said Jacobs, who is especially proud of the grilled squash sandwich with fontina cheese. “When growing season starts again, we’ll be able to make whatever we want, but for the winter season we’ll be getting creative. In summer, we’ll be able to get summer berries and freeze them so we’ll have them available year round.”

One of the biggest complaints about organic, locally sourced food is the price, but Reich and Jacobs say there is a way to eat well and not suffer from sticker shock.

“It doesn’t have to be expensive,” said Jacobs, who said part of the reduction of costs includes the fact that she and Reich are working owners, as well as the fact that there is no wait staff.

The offerings at Flourish are as diverse as the customers coming in the front door. In addition to a full menu of hot food, there are home baked breads, sprouted nuts and seeds, granola and kashi, an eclectic beverage cooler and a mouth-watering bakery. 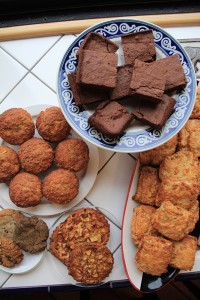 As an official taster, I can attest that they are, in fact, really rad. The sea salt chocolate chunk cookie uses Theo chocolate from Seattle. You can taste the difference at first bite. Other favorites are the oatmeal raisin cookie and the teff cookie—which uses grain grown right here in Idaho.

Flourish has been getting great reviews online so far. One reviewer from Facebook wrote, “I’ve been here 5 times and it’s only been open for a week. Enough said.”