A Night With Janis Joplin comes to the Panida

Janis Joplin came onto the national music scene like a flash in a pan, making an everlasting impact on rock music in what amounted to fewer than five years of her life. From the occasional gig in the mid-’60s to becoming a headliner at the Monterey Pop Festival and Woodstock, Joplin shifted expectations for female rockers and blazed an undeniable trail with sheer authenticity until her death from a heroin overdose in 1970. 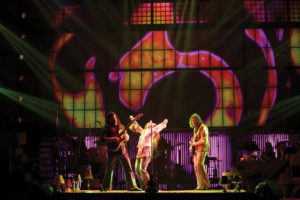 A moment on stage from A Night with Janis Joplin, playing at the Panida Theater Nov. 8 and 10. Courtesy photo.

Joplin’s infectious performances and emotional vocals cemented her place in rock ’n’ roll history, and her death at age 27 left a void that tribute bands and reenactors crave to fill. Those wishing to relive Joplin’s heyday, or who never got the chance to experience the real thing, can get (re)acquainted with the legendary artist by catching A Night With Janis Joplin at the Panida Theater, screening Friday, Nov. 8 and Sunday, Nov. 10.

The movie is a filmed version of the Broadway play of the same name, in which various actresses play Joplin and her many influences — Aretha Franklin, Etta James, Odetta and more — and reenact some of the iconic performances that comprise Joplin’s legacy.

Mary Bridget Davies, a self-proclaimed “interpreter” of Joplin’s work, plays the lead in the show and has toured extensively with the psychedelic pop star’s original band, Big Brother & The Holding Company. For her role as Joplin, Davies received a Tony Award nomination in 2014.

Davies does as authentic a job as one can imagine portraying the raw, unique power of Joplin, complete with the frizzy hair and playful banter between songs.