Isabelle Stillman’s sound is described as “a tapestry of her love of family, the confusion of growing up, the reality of being a woman in our society and her captivation with words.” 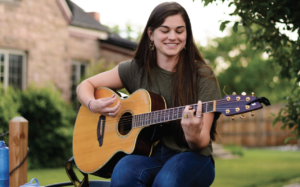 True that. In addition to meticulous instrumentation and intricately constructed compositional structures, the beating heart of her work is lyrical — each song is a mini-essay mingled with poetry and studded with evocative word-pictures, sly wordplay, and well turned juxtapositions of literal and metaphorical imagery.

If that sounds like a recommendation, it is. The Denver-based, St. Louis-born singer-songwriter tips her hat to artists including Brandi Carlile, Lee Ann Womack and Shakey Graves, among others, and if it’s true you can judge someone by the company they keep, then we judge Stillman as someone worth listening to.

Sandpoint will have the chance to do just that when Stillman takes the stage for Songwriter’s Night at Di Luna’s Cafe on Wednesday, Nov. 13. There, she’ll be joined by Sandpoint favorites Ben Olson and Cadie Archer (BOCA) and Josh Hedlund — a complimentary lineup that in itself would make this a go-to event.

But don’t take our word for it. For evidence, lend your ear to Stillman’s debut album Middle Sister, released in August 2019. Among the highlight tracks, “Kid” illustrates how Stillman’s warm vocals can alternate between a tender tremolo and strident, soaring delivery that aptly echoes her stated foundational influence The Dixie Chicks.

With “That Salinger Novel,” Stillman opens her instrumentation to include deep, pensive string lines punctuated by methodical bass plucking that brings to mind the motion of solitary pacing. It’s a lyrical piece especially sunk in thought — apropos of its evocation of author J.D. Salinger — made all the more beguiling by her slinky delivery that slips effortlessly up and down register and in and out of major and minor signatures. This one is a bona fide earworm.