Citing concerns about state of theater, community members turn out to Panida monthly board meeting

The Panida Board of Directors received some homework Feb. 19, as about 25 community members attended its monthly meeting — the most that Chairman Robert Moore reported ever seeing in his time on the board.

“I think people are definitely wanting their voices heard,” he said following the meeting at the Little Panida Theater, which ran for two and half hours. “I want to hear from people. It’s the community’s theater.”

Nearly a dozen people spoke — most of them longtime volunteers, former staff or former board members — raising a number of concerns about the state of the theater, ranging from fundraising and facilities to accounting and marketing.

Board members promised to return with answers to many of those concerns at their next meeting, scheduled for Wednesday, March 18, but not before taking in a quantity of specific input from attendees. 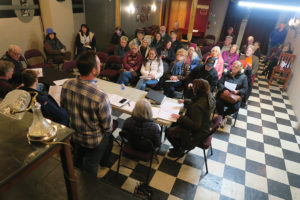 Among those who spoke, former board member and longtime volunteer Tari Pardini was concerned that the board is not in compliance with its own bylaws and state law by not including a designated treasurer among its officers — an omission, she said, that “jeopardizes the status of the nonprofit organization that we all love.”

Fellow former board member Nancy Renk echoed concerns about the lack of a designated treasurer on the board, and urged an in-depth profit and loss analysis to determine what kinds of events bring the theater the most financial benefit.

“The overall trend is not in the right direction,” she said.

Board member Aric Spence assured attendees that “we do look at that every month,” and Moore said after the meeting that the Panida has an accountant who monitors the books: “We’re actively looking at all that.”

Others, such as former board member Phyllis Goodwin, weighed in on what she described as “a lot of stumbles along the way” by the board and theater management, particularly regarding grant writing and fundraising — efforts that she suggested have not been kept up in recent years.

“Let me tell you how this breaks my heart,” she said, pointing to the ceiling in the Little Panida Theater, which has suffered water damage from a leak that has since been temporarily fixed. “It just breaks your heart to see your work undone.”

Susan Bates-Harbuck, who formerly served on the board in several capacities and is one of the original “Panida Moms,” whose efforts in the 1990s saved the Panida from being condemned, urged the board to ramp up efforts to increase membership.

“You’re losing money because you’re not getting members,” she said.

Likewise, former Panida Business Manager Maureen Tillberg said she hasn’t seen any major fundraisers for the theater in the past four years, noting that during her stint at the theater, the annual auction event raised between $11,000 and $15,000.

“I know it’s a lot of work but it’s worthwhile for the theater,” she said.

Singer-songwriter Katelyn Shook — of local favorites the Shook Twins, who every year put on the well-attended Giving Thanks concert at the Panida — offered a number of suggestions for how to improve performers’ experience at the theater.

Among her points were finding a way to provide a host to help live music acts set up the stage, run lights and handle sound, as well as improve the cleanliness and temperature of the backstage and greenroom. Of particular importance, she asked that ticketing be streamlined and for timelier payment of artists.

“This theater means everything to me; I’ve been performing here since I was a little kid,” she said, offering to volunteer in any way she could — echoing comments made by meeting attendee Jerry Luther, who reminded the board that it was the “old timers” who “kept this place getting cannonballed and knocked down. … You’ll have to get your own rabble rousers.”

The board took up a number of items in the regular session, but the most contentious centered on the matter of establishing rates for membership to the theater. Initially, the board considered a system of tiered memberships, ranging on the lowest end from a $100 per year discount membership available to volunteers up to a $1,200 per year “solid gold” membership for individuals or couples that carried with it perks like discounted and early seating.

Spence asked fellow board members if they thought volunteers should be required to purchase memberships, which drew vocal pushback from some attendees who said such a policy would only limit the number of people willing — or able — to donate both their time and money.

“People want to come to the Panida and have a wonderful time, and they want to donate and volunteer because they love the place,” said Ellen Weissman, who added she has volunteered at the theater for nearly 30 years. “For years it was, if you bought a ticket then you were a member.”

After some heated back and forth, Moore had to break a tie on the membership rate structure, ultimately voting to return the matter to the membership committee for further consideration.

“I think we need to work on some things here,” he said, adding after the meeting that “you need to hear the criticism as well as the praise.”

A consistent theme throughout the meeting was that the board has experienced a few members drop out mid-term, and have therefore been working on the back foot.

“I want to be totally clear that when we have five board members and are struggling to keep the doors open, we’re just getting to meeting meaningfully as a board,” said Spence.

For Moore, the solution is to encourage those who have given so much time, effort and financial support to the theater to lend their expertise and energy to serving on advisory boards and committees.

“There are lots of ways we can plug you in,” he said.