Denver-based Americana singer/songwriter Andy Hackbarth and his band will return to Sandpoint for a special performance at the Panida Theater on Friday, Nov. 11. The show will be part of Hackbarth’s 2016 “Steal You Away” tour and is also part of the Panida’s “Songwriter’s Circle Live Series.” 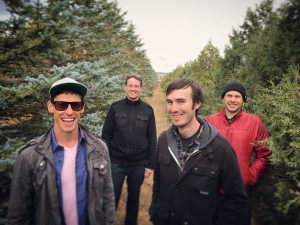 The Andy Hackbarth Band is all smiles when it comes to music.

The award-winning band will play tracks from their newest album, “Panorama Motel,” as well as one-of-a-kind renditions of popular cover songs and Spanish/classical guitar selections.

After the overwhelming response following their first performance at the Panida a year ago as part of Pend Oreille Arts Council’s Performance Series, Hackbarth and the band started to make plans for a future stop in Sandpoint.

“One of the most rewarding aspects of touring is the opportunity to see some of this country’s most beautiful places,” said Hackbarth. “Sandpoint holds a special place in our hearts. It’s absolutely stunning. The Panida Theater is a true gem and the residents here have been so welcoming. We just wish we could stay longer.”

A portion of proceeds from Friday’s show will benefit the Panida Theater.

“Panorama Motel” was released a year ago. Written and recorded in the wake of a messy breakup, the record finds Hackbarth singing over acoustic guitars, dobro, upright bass and organ, turning his recent brush with heartbreak into somet of the most moving songs of his career.

“It’s reflective of my music career as a whole,” Hackbarth said, “from the classical/Spanish guitar background to the darker, more indie/acoustic rock writing style that I’ve been gravitating toward lately. It’s beautiful, but dark and emotional. I’ve always loved the sound of the nylon-string guitar, and paired with layered violins, guitar swells and some haunting background vocals, its aim is to capture the despair and loneliness we all feel after a breakup.”

Check out the Andy Hackbarth Band at the Panida Theater on Friday, Nov. 11. Doors open at 7 p.m. and the show begins at 8 p.m. Tickets are available for $12 and can be bought online at Panida.org. Remaining tickets will be sold at the door the day of the show.