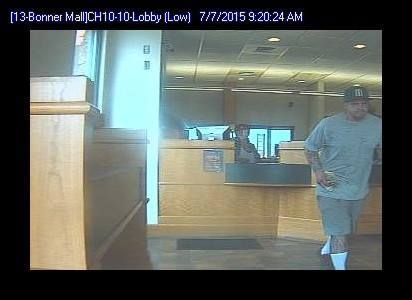 Ponderay Police have reported they are seeking a bank robbery suspect. A male suspect is on the run carrying an undisclosed amount of cash stolen from Horizon Credit Union. This is the second Ponderay bank robbery of the year. Another incident happened in March at Mountain West Bank, with the suspect fleeing empty-handed.

“On July 7th at approximately 0915 hours, a male suspect entered Horizon Credit Union and spoke with a teller,” wrote the Ponderay Police Department in a press release. “The suspect demanded cash and told the teller this was a robbery.”

The suspect then fled on foot with an undisclosed amount of cash.

The suspect has been described as male in his 20s, between 5’6″ and 5’8″ with a stocky build, dirty blond hair, scruffy facial hair and a full sleeve tattoo on both arms. He was reported to be wearing cargo-style shorts, a short sleeve shirt and an aqua green baseball cap with a dark colored bill with stickers.”

Photos have been released of the suspect from bank security cameras. 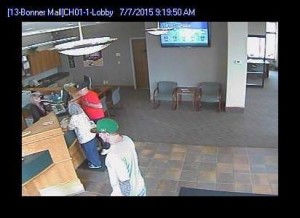 The Ponderay Police said a possible vehicle description is a newer Ford pickup, white or cream in color, with out of state plates. There is possibly a yellow or orange border on the license plates.