“I thought we’d have a record turnout for our annual meeting, but this seems about par for the course,” said interim Executive Director Ali Baranski, alluding to how tumultuous this year has been for the organization. 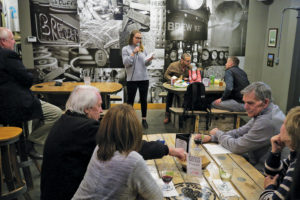 Looking back at 2019, The Festival experienced a challenge to its no-weapons policy that has since progressed into a headline-grabbing lawsuit between Bonner County and the city of Sandpoint; a ferocious thunderstorm resulted in the cancellation of its penultimate concert featuring Kool & The Gang; its longtime executive director was arrested for drunk driving following closing night and subsequently left the organization; and, finally, major changes to War Memorial Field are forcing organizers to rethink everything about how to put on the annual two-week summer concert series.

Summing up, Baranski told attendees at the annual meeting that, “The Festival series for 2019 was one of our best first weekends ever, followed by one of our toughest second weekends.”

A total of more than 35,000 people passed through The Festival’s gates in 2019 and, despite the many challenges facing the event in 2020, season pass sales for next year have been robust.

Baranski said 450 passes have already been sold, leaving 250 of the 700 made available — “which is really on track for having started a whole month late.” Passes went up to $299 on Dec. 1, and Festival Board Vice President Bob Witte reminded the crowd that the passes “make great stocking stuffers.”

In her financial report, Baranski said The Festival received $76,000 in grants over the year, supporting the organization’s core educational mission, which included hosting 129 area students at a free summer music camp, as well as other programs such as the youth orchestra and providing Northside Elementary students with free clarinets — that program alone costs $9,000. Baranski noted that applications for next year’s summer camp will be made available in the next few weeks.

Of The Festival’s $1.5 million fiscal year 2019 budget, 80% went to supporting the nonprofit’s mission, which includes educational programs, the concert series and other events throughout the year — the next one, a chamber concert at the Panida Theater, is planned for Thursday, Jan. 30. The remaining 20% of the budget went to pay for everything else that keeps The Festival afloat year after year.

“The Festival [concert series] is part of the mission,” Baranski said, stressing that the central thrust of the organization is to provide access to music performance and education for children and the community at large.

Addressing the various controversies and uncertainties in the year ahead, Baranski said the cancellation of the Kool & The Gang show precipitated a troublesome situation for the budget.

When organizers called off the concert, attendees were promised vouchers to compensate for their tickets. As Baranski and interim Office Manager Amy Bistline told the Reader in an earlier interview, The Festival paid for the Kool & The Gang show entirely out of pocket and providing vouchers for weather-related cancellations has never been Festival policy, nor will it be in the future.

“The unilateral decision to provide vouchers put us in a financially complicated position,” Baranski said at the annual meeting, noting that while vouchers were given to patrons during the summer and fall, that one-time offer ended with The Festival’s fiscal year on Sept. 30. No vouchers past that date have or will be honored.

Regarding the lawsuit over the weapons ban — which the county contends violates state law by barring firearms from a publicly-owned space — Baranski reiterated what she told the Reader in early December: “We do not believe there will be a decision prior to or that will affect our 2020 season.”

“We do support the Second Amendment but believe we are within our rights to enforce our own rules during the concert series,” she added.

Aside from the financial hit from the Kool & The Gang cancellation and the uncertainty of the county suit, Baranski said “the artificial turf [at Memorial Field] is currently our biggest challenge.”

Though The Festival is working with the city to ensure the new design accommodates the needs of the concert series, the design and construction schedule — which promises to have the field ready by July 30, 2020 — doesn’t leave much to chance with the timing of set-up at the field.

“It’s hard for us to get answers to the questions we need to have answered,” Baranski said, referring to the project timeline and how it might affect The Festival’s ability to keep its production schedule.

Finally, Baranski said The Festival board is “actively looking” for permanent staff members, and hopes to have the organization fully helmed after New Year’s.