There’s nothing like a crisis to show the true nature of a community, and the Cape Horn Fire is no exception. 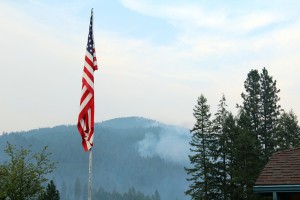 The American flag flies over the Bayview Community Center as smoke from the Cape Horn fire billows in the background. Photo by Ben Olson

When the blaze first broke out Sunday, confusion and uncertainty reigned among the nearby Bayview community and the neighborhoods scattered around the southern tip of Lake Pend Oreille. When some residents received pre-evacuation notices, that agitation only increased.

Even as residents wondered about the danger, they banded together as a community to face it head on. Donated items, shelters for displaced animals and opened homes were the order of the day for both displaced residents and the emergency workers that flooded the area. Families, like that of Shirley and Richard Hansen, banded together to support one another during the crisis.

“It’s actually brought us a lot closer together as a family,” Shirley Hansen said.

While those are encouraging signs, it doesn’t change the damage already sustained. According to Kirchner, eight structures have been lost, including six homes on the eastern half of Cape Horn, and as of Wednesday, 287 structures are still threatened in Bayview. 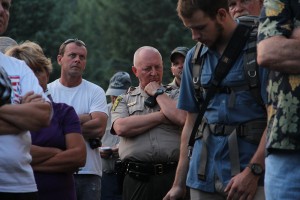 According to Hansen, whose family owns the Bitter End Marina, her son’s property was very nearly included among the losses.

“We’re not in danger, but our son’s house was just barely saved,” she said. “I think it came within feet [of his property].”

Chad Cadnum, Bayview resident for more than two decades, was among the first to spot the fire on Sunday. As an individual with firefighting experience, he set out on his ATV to do early recon work. He was able to share that information, as well as his extensive knowledge of the area, with the initial leadership team.

“Considering the [holiday weekend], we had a premonition this might happen, so we were prepared,” he said.

By Sunday afternoon, authorities issued evacuation notices to all homes within high-threat areas. According to Kirchner, it’s impossible to say exactly how many complied with evacuation, but he knew the orders impacted around 600 people. The Hansen family was among the population who had to make a painful decision: leave home to guarantee safety, or risk the danger and hold down the fort. Some of the family fled, while others held their ground. 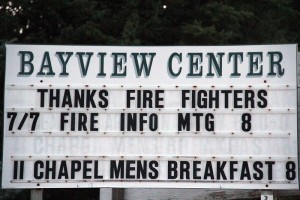 Signs like these greet firefighters and residents driving through Bayview. Photo by Ben Olson.

Resident Mike Peck and his family were similarly on edge, waiting for official word on whether to stay or go.

“We were ready to go within 15 minutes after we heard, but since then, it’s been a lot of waiting and watching and not sleeping,” he said.

Those who did evacuate were understandably anxious for news of their properties. They received answers at a Bayview community meeting, where emergency crew leaders promised to escort homeowners in small groups to their properties starting Wednesday morning. At the meeting, Greg Juvan, operation section chief for the Northern Rockies Incident Management Team, promised to get them settled back in as soon as possible.

“We’re going to go slow and steady, make deliberate choices and move toward a common goal, which is to bring you all home,” he said.

Even as containment efforts progress, officials warned residents to take all due precautions, including the removal of fire fuels in a perimeter around their properties. According to Juvan, the reminder is timelier than ever. He hasn’t seen a fire this bad in 20 years, and there’s still a lot of summer yet to come. 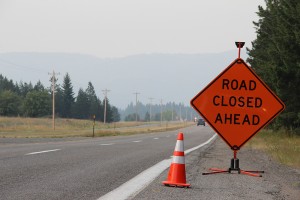 The highway leading into Bayview is closed to through traffic at the Farragut State Park visitor’s Center. Photo by Ben Olson.

“We’re a month and a half ahead of our normal schedule, so this is far from over,” he said.

If there’s a silver lining, residents say it’s the outpouring of good will. The meeting brought the entire community together, revealing a populace that was nervous yet full of good humor. They cracked jokes even as residents anxiously inquired about reopening businesses or serving as proxies for out-of-town neighbors, and they were quick to applaud the efforts of emergency crews.

“Just take a look around you,” Cadnum said, gesturing to the crowds at the community meeting. “Everyone is here for a reason.” 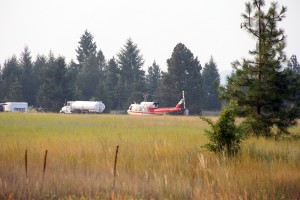 A helicopter and tanker are staged nearby at Farragut State Park for quick access. Photo by Ben Olson 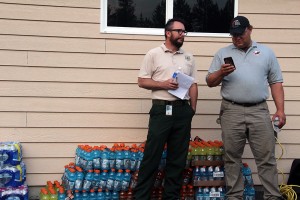 Officials stand before a stack of supplies at the meeting Tuesday night. Photo by Ben Olson.