A grizzly bear was euthanized over the weekend in Boundary County after killing seven sheep in a matter of just a few days.

IFG said in an announcement Monday that officers responded to a report on May 29 that five sheep had been killed overnight. A report on May 30 said two more had been killed just eight miles south of the first report. A GPS collar IFG placed on the bear in 2018 confirmed he was responsible for the killings. IFG euthanized the bear on June 1 in Copeland — about 18 miles north of Bonners Ferry — in a joint effort with U.S. Department of Agriculture Wildlife Services and the U.S. Fish and Wildlife Service. 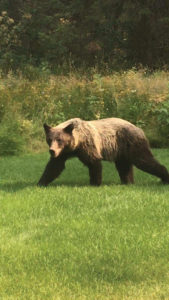 The grizzly spotted near Athol in 2018. Photo courtesy of Dylan May.

“Officers credit citizens’ timely reporting of the incidents with their ability to quickly respond to the bear and avoid additional conflicts with livestock producers and area residents,” IFG said.

This is not the young, 240-pound grizzly’s first run-in with trouble. In August 2018, IFG trapped the bear after he’d been found raiding chicken coops and chasing sheep near Garwood. They relocated him to the Cabinet Mountains on the Idaho-Montana border, and fixed him with the GPS collar which ultimately led to his confirmed location at the sheep killings near Copeland.

Grizzly bears are not uncommon in northern Boundary County, according to IFG, which estimates there are 70-80 grizzly bears living in the nearby Selkirk Grizzly Bear Recovery Zone, which covers parts of Idaho, Washington and British Columbia. However, IFG reports the last known incident of a grizzly harassing and killing livestock in the area was over five years ago.

As the full swing of summer approaches and more and more people pour into the mountains of North Idaho, bear encounters become increasingly likely. The National Park Service offers helpful bear safety tips at its website, nps.gov. Highlights of those tips include hiking in groups rather than alone so bears are more likely to hear or smell you, and speaking to the bear calmly and waving your arms slowly in the case of an encounter. Never drop your pack during an encounter, as it will allow the bear to access your food and be prompted further to pursue you. A pack can also be a form of protection should a bear attack you — if a grizzly or brown bear attacks, play dead on your stomach, the NPS suggests. If attacked by a black bear, fight back.