Planting trees is the best way to leave a legacy

My mid-20s were some of the brokest years of my life. When my college roommate called one day to tell me he was getting married in Ohio, I told him I was so happy for him — and that I likely couldn’t make it because I was broke.

He found me cheap airfare and even paid for the pants required to be a groomsman, so I gathered up all the money I had in the world — a huge glass jar of spare change I’d been collecting — and got a ride to Seattle to catch the plane. It was at this airport where I had a singular experience with a TSA employee. I was supposed to find one of those machines to dump the change and collect more portable money to take with me, but that didn’t happen, so I went through the metal detectors with this enormous jar of change and confused everyone.

“Well this is a first,” the agent said, scratching his head. 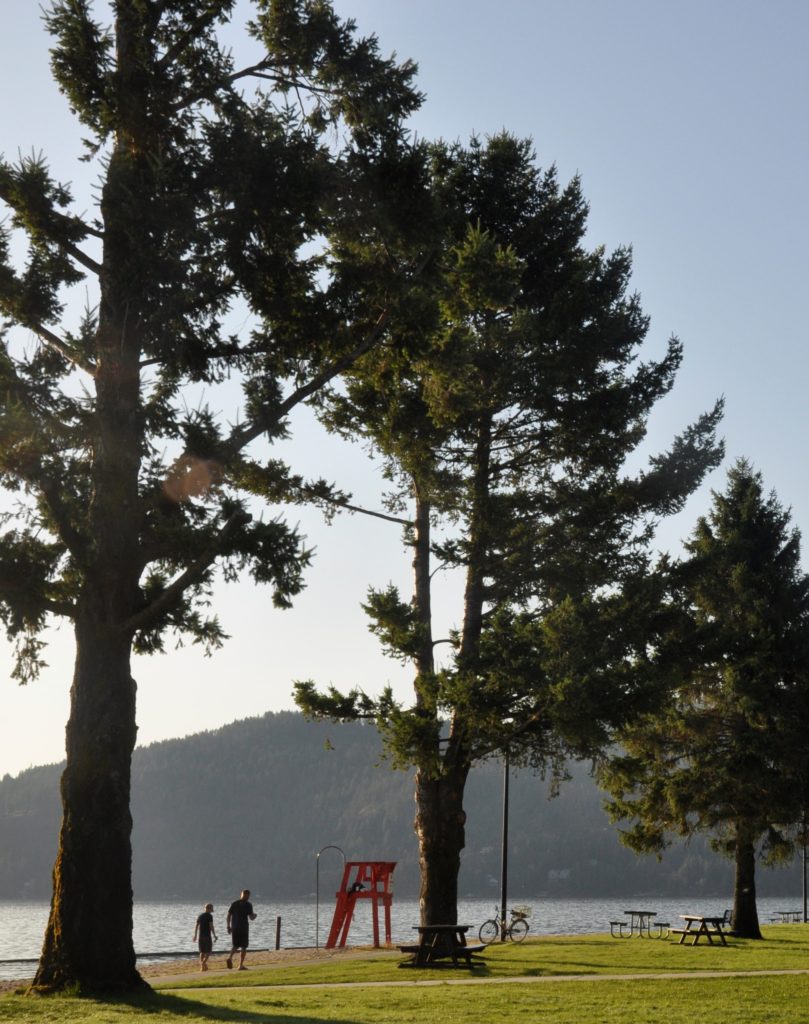 Pedestrians walk past some of the stately trees at Sandpoint City Beach. Photo by Sharon Lewis.

The powers that be eventually came up with the solution to dump all the change in one of those plastic tubs and send it through the metal detector. After the change made it through I sat and scooped it back into the jar, with fellow passengers looking at me the way someone would look at a shivering dog in the street. One guy actually dropped a dollar in the jar.

I felt, in a word, pathetic.

Fast forward to the end of the Ohio wedding and I had exhausted my change supply and decided the way home would be to hitchhike across the country. When my friend’s mom heard about this plan, she snuck two $100 bills in a bag of peanuts and said “Book a bus ticket home, please.”

I did book a ticket, but it only took me as far as Denver, so I set out by foot and thumb from there, winding into the mountains in the back of pickup trucks, in passenger cars with numerologists and ex-convicts, getting stuck in small towns for days sometimes before getting a lift. It was a rough two weeks to get home, but it was everything a young writer like me desired: freedom of movement, crazy experiences, and a revolving cast of characters who picked me up and shuttled me a bit farther on my journey home.

One thing I loved about my friend’s wedding was the gift bags they gave to all the people who attended. One item in the bag was a little tree planting kit, each containing a different type of tree. The idea was to plant the entire thing in the ground — the cardboard box would biodegrade, the seedling would have just enough starter soil to take hold, then it was Mother Nature’s job to see it grow someday into a mighty tree.

There were dozens of these little kits left after the wedding, and I crammed as many as I could fit into my pack before taking off. On my hitchhiking journey from Denver to Sandpoint, I stopped occasionally when a place seemed right and planted one of those little trees.

One Japanese maple was planted on a bluff above a rest area where I spent the afternoon waiting for a ride. A Douglas fir found a new home in the plush lawn outside a convenience store in Craig, Colo. Another exotic hardwood was placed in the hollow where I slept a hard rainy night outside of McCall, Idaho.

Each time I planted a tree, I felt this immediate rush of satisfaction, because I’ve always been one of those nerds who walks around looking at big, regal trees and says, “I wonder who planted that tree. Whoever it was, thank you.”

Planting a tree is one of the best ways to leave something behind after we die. Long after our bones are buried or our ashes returned to the earth, the trees we plant will still be there, reaching their branches ever upward into the sky and perhaps catching some future rambler’s eye like so many trees have caught mine.

Planting anything, for that matter, is leaving something behind when we go. One of my neighbors planted and carefully cultivated a morning glory vine several years ago. I’d often see her outside tending to the plant, training the vines to keep climbing and pouring sacred little vials of water with good thoughts in her head.

After she passed away a couple years ago, I’ve noticed that the morning glory is just as strong and vibrant as ever. She nursed it through the first couple of years and made it hardy enough to come back by itself. Every time I see that beautiful plant climbing up the wall, I think of her.

When Dan and Carrie Logan gave me a snippet taken from one of the willow trees that grew in the space where the roundabout by Super 1 is now (if you have lived here long enough and remember those trees, they were magnificent), I was so thankful that they thought of me. Those trees meant a lot to me, and it was rough to see them cut down. But progress marches on, right?

When Dan handed me the willow snippet in a little pot, I was thankful for another opportunity to plant a tree and, just maybe, some distant relative of mine — or perhaps just a stranger — will be walking around one day and say, “I wonder who planted that willow tree there. Whoever it was, thank you.”