Yep, I’m still talking tomatoes. When I left home a couple of weeks ago, it was under threat of frost. I thought of many of you, outside in the frigid air, stretching tarps over your at-risk gardens or pulling up vines of tomatoes to hang and ripen in the garage. But, alas, you weren’t on my mind for long. I was too busy savoring the 80-degree weather of southern Spain, eating her warm, ripe, sun-kissed tomatoes (straight off the vines, no less) with abandon.

If we are what we eat, I am feeling Spanish at heart. I haven’t yet started dreaming in Spanish, but visions of every lovely meal dance in my head. Fall was a perfect time to visit Spain and see all the food and wine activity. The olive orchards and vineyards were abuzz with busy workers in the middle of their harvests, and the afternoon heat was quite tolerable with an ice-cold cerveza in hand (it’s no wonder they siesta midday).

One of my favorite discoveries during this trip was the village of Carmona, about a half hour’s drive from Seville. I learned this beautiful village is the oldest continuously inhabited town in Europe (more than 5,000 years). It will become a UNESCO World Heritage Site, and no doubt it will become a popular attraction. I visited an abbey of nuns at the Convento de Santa Clara, who support their order (Order of Saint Clare) and convent by baking and selling cookies, Dulces de Santa Clara. The ancient convent was founded in the 15th century and is filled with beautiful artifacts and art. There’s a small courtyard for visitors and an impressive bell tower that serves as a village landmark. During my visit, perched at the very top of the bell tower was an enormous stork’s nest (the first one I’ve ever seen). The cookies we sampled at the convent, “yemas de Santa Clara,” can be purchased throughout the village. The sisters of Saint Clare are also noted for their “torta inglesa,” an English-type cake. Other convents in the region sell goods as well, each with their distinct offerings.

I love the food specialties found in every region. For instance, I was told the best pastries in Barcelona come from the district of Sarrià (and judging from the long lines I encountered at every pasty shop, I would tend to agree). Ceviche is another dish that uses different ingredients by region. While many people say ceviche originated in Peru, the Spanish declare it originated in Spain, made by the Moorish women from Granada, who took the first recipe to Peru.

And of course, we can’t forget their national dish of paella, developed in Valencia, again, by the Moors. Depending on the region in Spain, the ingredients vary and may include chorizo, chicken or rabbit for meats, and mussels, shrimp, crab and snails as seafood additions. Saffron is a key ingredient, along with garlic, and lemon wedges on the side are a must.

Gremolata is often served alongside the paella (a mixture of finely minced lemon zest, parsley and garlic). The delicacy of a great pan of paella is “socarrat” — a thin, delicious crust that forms on the rice, at the bottom of the pan (socarrat is achieved mere seconds before you burn the rice).

Another Andalusian favorite is sopa de salmorejo (though I may not be an expert at making it, I profess to be an expert at eating it). Unlike its chunkier and red-colored cousin, gazpacho, salmorejo is creamy, orange-hued and void of any seeds. During this trip, I sampled myriad bowls at sidewalk cafes and the tapas bars of Toledo, Nerja, Madrid and Malaga. It’s often served with the garnish floated on top, but sometimes it comes on the side, and it was always a surprise: chopped hard-cooked eggs, croutons, olive oil, finely chopped green pepper and even Ibérico ham, the local delicacy.

Ibérico ham from a couple of provinces (Salamanca and Huelva) comes with a certificate of provenance noting the pigs’ diet and even ancestry (I swear it’s true).

I’m sad to report I didn’t have the energy to attempt “nothing to declare” contraband. I was nervous enough about all the COVID protocols for U.S. reentry (which went without a hitch), so there will be no Ibérico ham for my next tapas party.

That said, I did manage to make a few key purchases, as I have a paella cooking class coming up (I donated it last spring for the Friends of the Scotchman’s Peak auction). I tend to go a bit overboard in foreign markets. So now, my luggage collection includes yet another little, essential black suitcase, this one purchased in Malaga. And I’m happy to report that the double-wrapped bottle of just-pressed, extra-virgin Spanish olive oil made it here unscathed and will go into my next batch of salmorejo.

For now, you may have to pick some up at Winter Ridge. Adios! 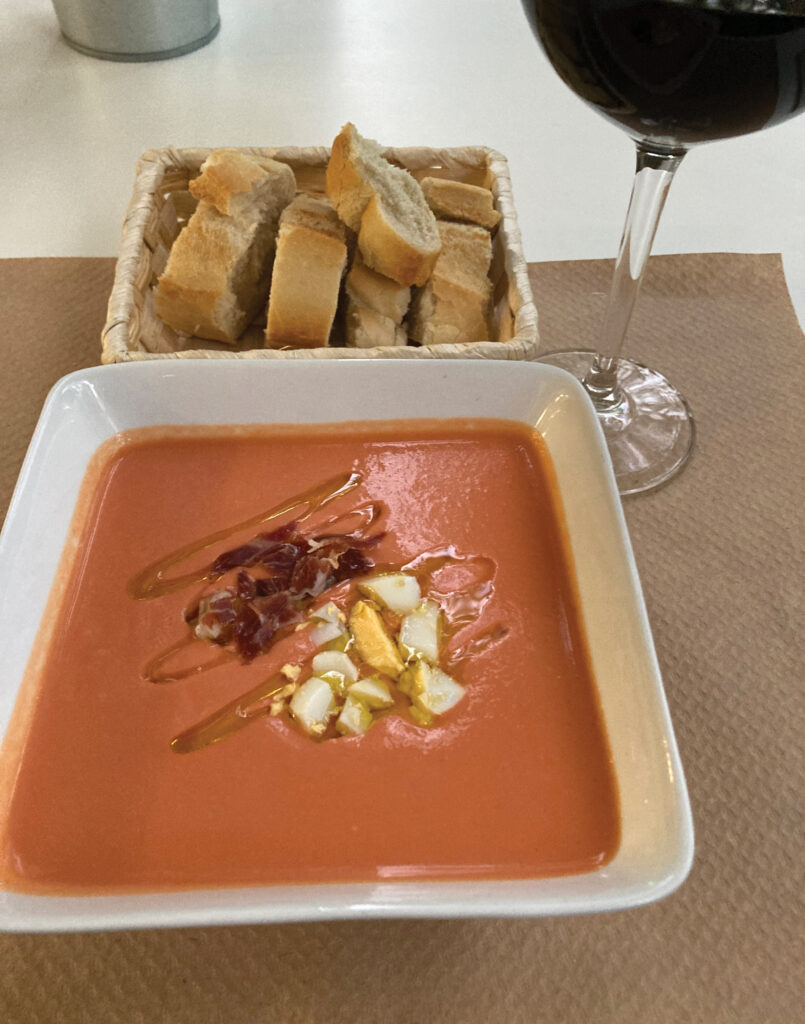 Salmorejo is a classic, creamy Andalusian soup, made primarily with tomatoes, bread and garlic. It’s a great way to use your over-ripe and/or blemished garden tomatoes. Yields four bowls but the recipe doubles easily. (I have substituted Tito’s vodka for the water and served it in little bowls, as a starter for Sunday brunch.)

In a blender, puree the chopped tomatoes with the bread, garlic, sherry vinegar and 1/2 cup of water at high speed until very smooth, about 1 minute. With the blender on, drizzle in 1/4 cup of olive oil until well incorporated and smooth. Season with salt. Cover and refrigerate until the soup is cold, at least an hour or two.

Divide the soup among 4 bowls. Garnish with the chopped eggs and ham, drizzle with olive oil and serve.

The soup can be refrigerated for up to 2 days, but give it a good whisking before pouring into the bowls.