It’s me again, hoping to discuss a subject near and dear to my heart! Today, we’re touching base on a pretty awesome science. The science of Space Travel, both from the viewpoints of Science and Science Fiction. We’ll start with a popular subject from both literature and television: Faster than Light travel! It’s not quite as simple as going Bam, I’m there!

There is a paradoxical problem when traveling at, or faster than the speed of light. As far as we know, everything has a maximum speed limit, which, as we know, is the speed of light (186,000 miles per second). This includes the expansion of spacetime. Therefore, it can be theorized that, if you’re in a vessel traveling the speed of light, you’re traveling faster than time. You would, in theory, arrive at your destination before you have left.. But how? You wouldn’t have left yet, but you already would have arrived? Would that mean there are two of you? Is your consciousness split? How would that work? 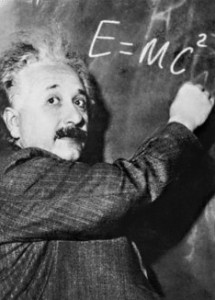 The man, the myth, the equation. Image courtesy of Creative Commons.

This is known as a paradox, and has been covered extensively in most forms of science fiction literature and television.

The zaniness of time doesn’t stop there, however. Due to the Theory of Relativity, a person in a vessel that’s going nearly the speed of light in a vacuum (Space, not your floor cleaner at home), would experience time differently than someone on Earth. This is called Time Dilation, and it’s another Science Fiction favorite. The closer to the speed of light you travel, the greater the difference in the passage of time between the interior of the vessel and the exterior. A person inside of a ship traveling just a few miles per second shy of the speed of light would perceive a 400 year trip across the galaxy as near-instantaneous, while their family at home would have been dead for centuries by the time they step out of their ship and onto fertile new soils.

It sounds like crazy Science Fiction that could never be real, but Time Dilation is a proven thing, even here on Earth. Did you know that time moves slightly more quickly at the peak of Mount Everest than it does in Seattle? This has to deal with the gravitational forces of the Earth being more concentrated and warping time closer to its surface than places further away. Don’t go planning an immortality trip to Everest any time soon, though, the difference is only a fraction of a fraction of a second, detectable only by some pretty impressive synchronized clocks (like ones NASA uses on Earth and in the International Space Station). The weirdness of Time Dilation is even stranger when you throw the physics of Black Holes into the mix. In theory, if you were to fall into a Black Hole, at one point, you would observe everything horrible happening to you in the gravity well over the course of an eternity.A literal eternity, not an eternity while waiting in line at airport security.

I digress! This post wasn’t about how time is weird and confusing, it was about space travel, fast space travel! Why aren’t we able to do it right now? I want to visit my cousin on Mars in the next 45 minutes!

There are a few problems here. It takes an incredible amount of time and energy to propel an object with mass to those speeds, and equal amounts of time and energy to try and slow it down. On top of that, we have to figure out how to do it safely. I don’t know about you, but hurdling through the vacuum of space at mind-bending speeds with nothing but an oxygen tank and your underpants doesn’t sound like an ideal vacation. So we’re presented with the problem of propelling ourselves, enough food, enough recyclable water and enough Netflix to get us to where we’re going without dying or losing our minds. That’s a lot of weight, and as any traveler knows, every ounce counts when you’re flying on a budget.

Sounds hopeless, right? Not quite! There is hope in sight!

The largest hurdle of Space Travel is most definitely getting off the Earth and into Space; this is because of the gravitational pull of Earth working against us, trying to pull objects back down. Essentially, the further you go, the progressively lighter objects become, and the easier they are to move to an extent. Getting them from sea level to Low Earth Orbit is where we burn the most fuel and spend the most energy. After reaching a certain threshold, you can start using the Earth’s gravity to greatly alter your course with relatively little energy.

This goes quite a bit deeper, and I will do my best to sum this up without droning like your high school math teacher from the 70s. 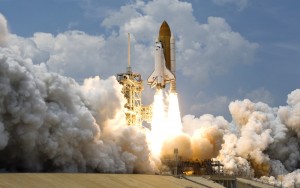 Think of moving towards the Apoapsis as climbing a big hill in your car, stepping on the gas while going uphill isn’t going to dramatically increase your speed. Once you hit that peak, however, and start driving downhill, you notice that stomping the pedal makes you go REALLY fast, maybe even REALLY fast right through a hot dog stand!

Orbital maneuvers are a lot like going up and down hills. If you can plan a sharp usage of energy at the right time, for a certain amount of time, your acceleration growth will grow exponentially and dramatically alter your orbit. This is called an Orbital Maneuver, and is achieved through something called a Burn.

Using the right burn techniques can help us go fast enough to break orbit, entirely and enter new spheres of influence. In the case of leaving Earth’s orbit, this usually means entering the Sun’s orbit. The numbers grow quite a bit at this point, and provided you have enough fuel, you can make even more dramatic burn maneuvers and use your new position to intersect other planets in the Solar System. If you’re trying to leave the Solar System entirely, you’re more than likely going to need to use the gravity of our big neighbor, Jupiter, just like Voyager did in 2012 (it launched in 1977).

Achieving speeds to leave an orbit is called Escape Velocity.

Next time, we’re going to talk about the cool spacecraft we’re currently using, and have theorized using in the future for various endeavors in Outer Space.

The next time you’re at a party, try dropping what you learned here about time dilation, burns and escape velocity. If someone throws shade your way, just smirk and tell them:”What? It’s just rocket science.”