This Tuesday, the Sandpoint Middle School quad was transformed into a bonafide racetrack with the Solar Cars project. The project is in its 8th year at SMS, thanks to a generous grant provided by Panhandle Alliance for Education (PAFE). 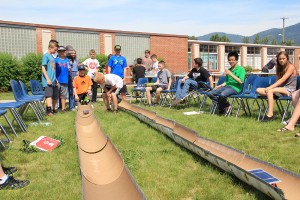 “Our hats are off to Panhandle Alliance for Education,” said Marcea Marine, one of the teacher advisors for the popular project. “We wouldn’t be able to do this without them.”

During race day, students take turns competing, running stopwatches and judging the performance of each vehicle.

The Solar Cars project aims to teach the value of alternative energy to every seventh grader at SMS, especially solar energy. Each student has two weeks to build their own car, which will then be powered by fitting a solar panel to the top of it.

“They build everything from scratch,” said Marine. “It’s a great collision of science and math.”

“This is one of our longest standing grants,” said Marcia Wilson, executive director for PAFE. “Teachers love it, kids love it. Our purpose is to expose kids to a lot of enrichment activities they wouldn’t otherwise get.”

The grant is just one of 52 grants that PAFE awarded to different schools in the Lake Pend Oreille School District. The total amount PAFE awarded in 2015/16 school year is just over $100,000.

“Over time, we’ve awarded 617 grants totaling about $1.5 million,” said Wilson. “Teachers don’t have very much excess money to do things like this in their classroom. This gives them the outlet to do some fun stuff. We want to give kids a taste of something they might want to pursue as an adult. We like to plant seeds.”

For seventh grader Nathan Ford, the project was as fun as it was educational.

“It teaches you how to build stuff and to keep everything straight and working,” said Ford. “I built the bottom of my car out of balsa wood and used cardboard for the sides and strips of colored tissue paper with liquid glue.”

Marine, along with fellow teacher advisors Caitlen Sandell and Shonne Hartz, believes the Solar Cars project is a meaningful way to help to pass the torch to future generations to become stewards of a healthy planet.

“These young ladies and men are the future,” said Marine. “They will help solve the energy crisis.”