‘Sylvia’ finds the funny side of dog ownership

They don’t call dogs a  man’s best friend for no reason.

“Sylvia,” the latest play from Cade Prophet Memorial Productions, takes that basic truth to its most hysterical and heartfelt conclusion. The cast and crew of the play, set for three performances this weekend at the Heartwood Center, are ready to demonstrate just how far a person will go for his or her pet. All that entertainment is for a good cause, as proceeds from the event go toward Panhandle Animal Shelter.

“Since this is our second Memorial Day show and all proceeds go to the animal shelter, I try to find a show about animals,” said Cade Prophet Memorial Productions director Dorothy Prophet. 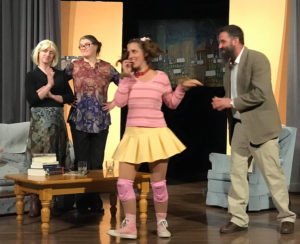 An animal — a dog, more precisely — is the eponymous heart of “Sylvia.” The play follows a married couple, Greg (played by Seneca Cummings) and Kate (played by Becky Campbell), entering into their twilight years. The kids are out of the house, and they can finally begin enjoying a little free time. At least, that was the case, until Greg adopts a dog, Sylvia, against his wife’s wishes. The new pet leads to marital friction and outrageous comedy as Kate begins to believe her husband loves his dog more than her.

“It becomes a tug of war for his attention and even, in some cases, his affection,” Prophet said.

Campbell and Cummings play the domestic dispute with the light hand and comic timing they’ve developed over many years in local theater.

“I love working with Seneca. He’s a strong performer and very versatile,” said Prophet. “… And Becky makes rehearsals so fun. She’s always on top of things.”

The other cast members have their own challenges. Meredith Field plays the title role Sylvia, and much of the play’s comedy comes from her knack for adopting the behavior and personality of the lovable pooch.

“She has really embraced her inner dog,” said Prophet.

Eric Bond, another recognizable face in local theater, plays no less than three roles. Capturing the essence of three separate characters is no easy task, but Prophet said he carries it off with panache.

“He has managed to find all three character and flesh them out and make them real,” she said.

Like previous Memorial Day weekend shows, all proceeds from “Sylvia” go to Panhandle Animal Shelter. Prophet set up the production company in memory of her late son, Cade Prophet, who was known for his love of animals.

Catch “Sylvia” 7 p.m. Friday and Saturday and 2 p.m. Sunday at the Heartwood Center. Tickets are available at Eichardt’s, online at Brown Paper Tickets or at the door. Due to some strong language, audience discretion is advised.