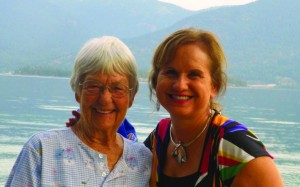 An inter-agency team headed up by the National Transportation Safety Board is investigating the incident and have confirmed two of the three passengers are dead. The third passenger is unaccounted for, but search parties haven’t found any signs of survivors.

“[These individuals] were a part of the aviation community, of which Civil Air Patrol is also a part,” said Tom Woltz of Civil Air Patrol at a press conference Friday. “I want to extend my condolences to their families.”

According to Bonner County Sheriff Daryl Wheeler, his deputies received a distress signal from an aircraft at 8:26 a.m. Thursday morning. The signal stopped transmitting not long afterward. Since the emergency beacons are designed to transmit after an impact, Woltz believes the device was damaged in the collision. 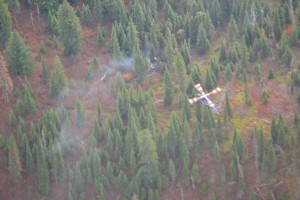 With the help of Whitefish-based Two Bear Air, which specializes in assisting search and rescue operations, authorities battled cloud-obscured mountaintops to spot the crash site, finally catching sight of the smoking wreckage around 2:30 p.m.

“Once we were able to force our way through the clouds and find a hole to the ground, that’s when we spotted the plane,” said Woltz. 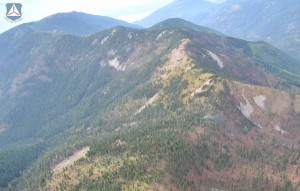 Round Top Mountain, with the smoke from the crash just visible. Credit: Bonner County Sheriff’s Office

The fixed-wing Cessna 182 rested on the south face of Round Top Mountain just north of Hope. An Air Force Rescue and Coordination Center radar report indicated the plane was flying 47 knots and 71 feet off the ground immediately before the crash. Debris was scattered around the scene, and the aircraft itself was burning.

“Most of you have seen these kinds of pictures [of wrecked airplanes] on TV, and this was no different,” Bonner County Sheriff Daryl Wheeler said. 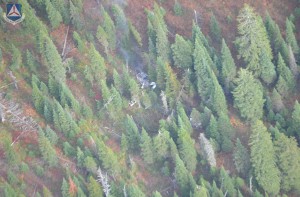 According to Wheeler, the search team discovered the remains of two passengers, believed to be Pam Bird and Tookie Hensley, inside the airplane. The third body, likely Don Hensley, is missing. Wheeler said his remains may be trapped under the wrecked fuselage, which is still burning and requires machinery to move. The team anticipates returning to the crash site, which Wheeler said is being treated with the utmost care, Saturday morning with new investigators.

“We have no idea what caused the accident,” Wheeler said.

“At this point, we just want to maintain the integrity of the scene,” he added later. 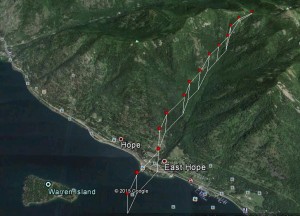 A map of the region. Credit: Bonner County Sheriff’s Office

It’s a tragic end to what started out as a joyful trip between dear friends, who left the Bird’s airfield at 8:16 a.m. The plan was to fly to Minot, N.D., then continue eastward. According to Rachel Riddle Schwam, Bird’s daughter and the director of the Bird Aviation Museum and Invention Center, the three looked forward to a lobster dinner in Maine. They then intended to fly to Florida and visit Bird’s son and six-week-old grandchild.

Schwam said the Bird Aviation Museum and Invention Center will likely release a statement about the crash within the next few days. The museum is being run by its volunteers while Schwam attends to her family, she said.

All three passengers in the crash built impressive reputations over long careers.

According to her biography on the Bird Aviation Museum website, Bird worked liaison between inventors and investors, ultimate founding and leading Innovative Product Technologies as its CEO. She advised manufacturers on product distribution and also shared her expertise with media outlets, serving as a consultant for ABC’s “20/20” and providing quotes to newspapers like The New York Times. An avid writer herself, she authored more than 70 publications of her own, including the “Inventing for Dummies” book in the popular “Dummies” series. She was a licensed pilot who loved aviation, horseback riding, skiing, gardening and boating.

Bird was the wife of Dr. Forrest M. Bird, a renowned aviator and the famous inventor of revolutionary medical respirator technology. Together, the two founded the Bird Aviation Museum and Invention Center in Sagle, which showcases dozens of aircraft and inventions with the goal of inspiring youth toward careers in science. Forrest Bird passed away at the age of 94 just two months earlier in August.

Don and Tookie Hensley were also well-known in the aviation world. Both Mohave Valley, Ariz., residents were pilots, and Tookie Hensley was a mentor and instructor to Pam Bird. A member of numerous aviation organizations, she was an enthusiastic supporter of Air Race Classic, started in 1929 to organize air races for female pilots forbidden from competing against men. The organization provides resources for women interested in aviation.

“These were incredible figures in the aviation world, and we want to do the best job we can investigating this,” Wheeler said.