The science of natural and human-caused climate change

Scientists have been warning us that our climate is changing rapidly, and that humans are responsible. Most people can see that climate has been changing, but some question if it’s a result of human activity, and if it’s part of a long term trend. The details of how the climate is changing are based on many different types of studies, which I will discuss in another article. For now, I’ll just describe the physical laws that are driving global warming. These laws are well understood, verifiable and as independent of political opinion as the law of gravity. 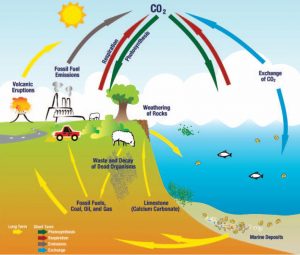 A graph showing the various human and natural causes to climate change on earth. Courtesy graphic.

Most of the energy radiated by the sun is in the visible part of the spectrum. Air doesn’t absorb visible light. Some of the sunlight is reflected by clouds and aerosols, but most reaches the earth’s surface. At the surface some is reflected by ice and snow. The visible light that doesn’t get reflected is absorbed by the ground or bodies of water and turned into heat. The heat is radiated away from the surface in the form of infrared light. Some of the gases in the air absorb infrared light. Because the incoming solar radiation, being visible light, doesn’t get absorbed, while some of the outgoing infrared radiation does get absorbed, the earth ends up getting hotter. This is called the greenhouse effect. The two most abundant gases in the atmosphere, nitrogen and oxygen, exert almost no greenhouse effect. Instead, the greenhouse effect comes from gas molecules that are present in small amounts. Water vapour and carbon dioxide (CO2) are the two most important greenhouse gases. When CO2 increases, the atmosphere warms up and it can hold more water vapor. The combined effect of more water vapor and more CO2 causes a much greater warming effect, than the CO2 alone. Methane, nitrous oxide, ozone and halocarbons, present in the atmosphere in small amounts, also contribute significantly to the greenhouse effect. Clouds, depending on their type, location and thickness, may contribute to the greenhouse effect, or they may have a cooling effect by reflecting incoming light from the sun.

The climate has changed from natural causes in the past. What is the evidence that this time it’s human caused? Since the 1970s, the sun has been cooling slightly, while the Earth has gotten warmer. Also,the stratosphere has cooled at the same time that the troposphere has warmed. If the sun were responsible for the increased warming, it would occur throughout the entire atmosphere.

The most dramatic example of major natural changes is the occurrence of ice ages. The onset of ice ages is linked to periodic changes in the shape of the earth’s orbit, and the tilt of its axis, which are called Milankovich cycles. Milankovich found that conditions that favored an extended period of more solar radiation in the winter at far northern latitudes, and less solar radiation in the summer, lead to slightly warmer, snowier northern winters, and less melting in the summer, leading to formation of glaciers. As glaciers spread over the northern hemisphere, more sunlight was reflected back into space, amplifying the cooling effect. The natural greenhouse effect also played a role. As the oceans cooled down during the ice ages, the solubility of CO2 in the ocean increased. This led to a decrease of CO2 in the atmosphere, which decreased the natural greenhouse effect, and also amplified the cooling effect of the Milankovich cycles. This also explains why there is a lag between the onset of lower temperatures during an ice age, and the subsequent decrease in atmospheric CO2. We have seen that Milankovich cycles can cause dramatic climate shifts but these changes happen over tens to hundreds of thousands of years, so slowly that they cannot account for the rapid warming we are seeing today. Also, the current position of the Earth’s orbit should result in cooler temperatures, but instead, the opposite is happening—the average temperature of the Earth is getting warmer.

Volcanoes can change the Earth’s climate is by causing a temporary cooling effect. After a very large volcanic eruption, particles can stay in the atmosphere for as long as a few years, where they block sunlight and make the planet a little bit cooler. El Nino events can cause short term climate fluctuations, but only for a year or two. None of the above natural causes can explain global warming that’s occurring now,

On the other hand, there is a very good correlation between the timing of the current warming trend and the dramatic increase in atmospheric CO2 levels in the modern industrial era. The concentration of CO2 in the atmosphere depends on the carbon cycle, which has both natural and human caused components.

Prior to the onset of industrialization, the natural carbon cycle kept the CO2 level constant at around 270 ppm for thousands of years. CO2 levels started to increase in modern times, and the rate has been accelerating. Today’s level of 400 ppm is higher than it’s been since the Pleistocene era, and can only be accounted for by human activities, primarily the burning of fossil fuel. Since we have a good idea how much fossil fuel has been burned, we know how much extra CO2 has been added by this source. In fact, fossil fuel burning would have increased atmospheric CO2 twice as much as it has, if it weren’t for natural carbon sinks. In particular, much of the excess CO2 has been taken up by the ocean, which has led to ocean acidification, another serious problem. In the last few years, the concentrations of methane and nitrous oxide, both potent greenhouse gases, have also been increasing rapidly above their natural levels. Aside from burning fossil fuels, other human activities including deforestation, agriculture, natural gas leakage and cement manufacture also contribute to the increase in greenhouse gas.