The mood was tense at a meeting of Sagle homeowners July 27, and for good reason. Gathered at the Little Church in the Wildwood, about midway between Bottle and Garfield bays, it is no exaggeration to say that residents have been terrorized by a rising trend in burglaries in recent years. Fed up with helplessly watching home after home get hit, the homeowners met with Bonner County Sheriff’s Office volunteers to learn how to better protect themselves. 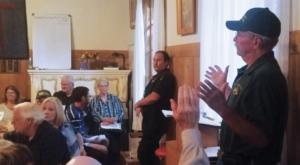 “Now I’m so scared,” said one homeowner, who requested to remain unnamed. “When I hear a noise outside, I don’t want to go outside and investigate that.”

Recent data bears out local concerns. A search on crimereports.com, which the Bonner County Sheriff’s Office uses to catalogue crime incidents, shows 56 recent property crimes in Bonner County. A majority are scattered around the Sagle area, particularly in the residential areas near the river and lake to the east and west of U.S. 95. Other hot spots include Clark Fork, Cocolalla and Priest River.

According to the annual Idaho State Police Crime Report, Bonner County experienced a 13% increase in overall crime between 2017 and 2018. Burglary increased from 179 to 187 incidents, while larceny jumped from 511 to 519 reports. The overall crime rate is measured at 46 incidents per 1,000 residents in 2018. That gives Bonner County the 15th highest crime rate in Idaho.

According to those who spoke at the recent meeting in Sagle, the burglaries demonstrate a few commonalities: they typically occur where population density is low and the chance of escaping unobserved is high. Another hallmark of many robberies is multiple break-ins — one homeowner has been hit 12 times, according to his neighbors. Between the property damage and items stolen, the crimes are costly, adding up to thousands of dollars lost. Finally, the burglaries cover a swath of rural areas across North Idaho. Of the more than 50 people who showed up for the meeting, almost a dozen raised their hands when asked who had been victimized.

The burglarized families themselves, however, are a diverse lot. Their properties range in value. Some are permanent residents, while others are so-called “snowbirds” who stay in North Idaho on a seasonal basis. That distinction was a source of tension at the meeting. Permanent residents expressed frustration that the vacant houses potentially left their neighborhoods more vulnerable.

“Some of us are seasonal, some of us are permanent,” said one homeowner. “In Martin Bay, we have 90 residents, 90 lots. And we have 12 full-time residents. There’s absolutely no way we can police houses in the woods — these shacks with these gates that they get at Big R — and I resent the fact that that’s being put upon me.”

Firearms and chainsaws are among the most common items stolen. But clothing, jewelry, tools, art, electronics, recreational gear are also targeted. One family lost their daughter’s high-school graduation ring.

According to Sheriff’s Captain Tim Hemphill, it’s difficult to assign any one cause for the steady rise in property crimes. Drug activity is often a factor, he said, but based on investigations into about 25 burglaries in the Sagle area since February, Hemphill believes they are often simply crimes of opportunity.

The culprits are familiar with the areas they’re targeting and they know what time of the day or year homes will be empty.

Spring and fall, when seasonal residents are gone and there’s no snow to complicate matters, are busy times for burglars. There’s also rarely evidence of coordination between incidents, Hemphill added.

“It’s easy to get a mindset that when you have burglaries in one area, it’s done by one person or group of people, but that’s often not the case,” he said.

At the meeting, many homeowners expressed frustration with the BCSO’s lack of communication. Hemphill appreciates those concerns. He said that law enforcement is often making progress on cases, even when they can’t comment on it.

“People are hoping for regular updates on their case when the nature of the investigation precludes us from sharing information, and I understand that frustration,” he said.

Others were more appreciative of the BCSO response. One couple said Sheriff’s Deputy Chris Bonner went above and beyond the call of duty, snowshoeing into their property and preventing the burglar from stealing additional items on a planned return trip.

The spate of burglaries comes alongside a period of unusual calm within Sandpoint city limits. Sandpoint Police Captain Rick Bailey said recent property crimes have been low in Sandpoint compared to previous years, with a spurt of early-summer break-ins at Foster’s Crossing, MarketPlace Antiques and several cars, then dwindling after a single arrest. He said the higher population density works in Sandpoint’s favor: more neighbors and police officers make burglary more difficult.

“We’re talking about two different creatures here,” he said. “It’s hard [for BCSO] to be proactive with the amount of manpower they have and the amount of territory they have to cover.”

BCSO officers said homeowners can take measures to put the odds in their favor. Game cameras, alarms and video systems can be vital in capturing evidence. Outdoor lighting, interior lighting that activates a regular timer, trimmed shrubs and bushes near the home — anything that makes it difficult for burglars to hide — are smart choices. For homeowners gone on extended absences, coordination with neighbors is vital to avoid signs of vulnerability like unplowed snow or uncollected mail.

“We just want people to be aware that they can start these programs themselves, and all they need to do is contact the sheriff’s office,” Dudley said.