The nature of need’s past, present and future

Editor’s note: This article is the first in a multi-part series exploring the problem of poverty in Bonner County.

Poverty in Sandpoint has long been regarded as an invisible problem.

It’s a reality that makes life difficult for those who work closely with the region’s most vulnerable residents. After all, those who face the threat of homelessness aren’t usually sleeping on the streets—they’re skirting eviction from their home. The area’s hungry residents aren’t begging for food—they’re stretching dollars at the grocery store or going to school Monday morning on an empty stomach from over the weekend. 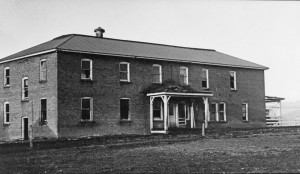 While poverty is an inescapable part of any society, statistics show that it is especially prevalent in Bonner County. Economist Alivia Metts said the percentage of people living below the federal poverty threshold usually hovers around 15 percent, although in circumstances like the Great Recession, it has climbed as high as 17.6 percent. The most recent figures, recorded in 2013, place residents below the poverty line at 17 percent.

When President Lyndon B. Johnson declared a war on poverty as a part of his Great Society initiatives in 1964, it brought new clarity to an issue that previously existed in murkier terms. That was certainly true in Bonner County, where historically, people approached material need in much different ways. One of the earliest examples is the Bonner County Poor Farm, which operated from the early 1900s to the middle of the century. Those who sought refuge in the Poor Farm—often older, single men without the safety net of a family to fall back on—received meals in exchange for chores around the property. Since the establishment raised its own meat and dairy, it was a largely self-sufficient operation.

According to the staff of the Bonner County History Museum, modern standards of living and federal welfare programs in the early 1960s helped bring about increased awareness of class distinctions. Prior to that, longtime residents and museum volunteers report that Bonner County lifestyles were a common rural experience often lacking in material wealth.

“[Our volunteers] grew up with only one pair of shoes, and they ate pretty much the same thing every night,” museum staff members Olivia Morlen, Heather Upton and Cameron Murray wrote. “Homes still lacked indoor plumbing, but they were warm and had food every day, so they never felt poor.”

As Bonner County moved into the latter half of the 20th century, modern perceptions began to reshape the issue. According to Metts, the region shaped itself as a resource-based economy, with timber in particular providing a solid standard of living without the need for advanced education.

Around the same time, however, Sandpoint began developing a reputation as an excellent tourist destination and retirement community. According to Idaho Department of Labor North Idaho Economist Sam Wolkenhauer, the economy responded with the types of jobs tourists and retirees require from such a community: namely, service industry jobs.

“Retail is a huge part of the Bonner County economy, and it tends to not pay very well,” said Metts.

According to IDL data, the highest category of employment in Bonner County is retail work, which represents 17 percent of employed residents. Next comes health care at 13 percent and then accommodation- and food-related jobs at 11 percent. The problem is that with the exception of some health care jobs, these are all relatively low-paying positions.

“Income is low in Bonner County, but that’s because a large percentage of the population work these low-paying jobs,” said Wolkenhauer.

This transition has helped inflate the local housing market to abnormal levels for a town of Sandpoint’s size, Wolkenhauer said. For low-income families, the cost of renting a home or apartment slowly crawled upward over the years, while home ownership became increasingly unobtainable.

“Even for people who can manage monthly rent, moving into a new place can cost $2,000 or $3,000 alone,” said Alice Wallace, director of the Bonner Community Food Center. “A lot of people can’t manage that.”

What’s more, the housing market crash of 2008 made a bad situation even worse.

“It reinforced the impression that Sandpoint is a luxury place to live,” Wolkenhauer said.

The high cost of housing places strain on other areas of a working class family’s budget, particularly food. Wallace said the food bank serves an average of 100 clients a day. Meanwhile, the organization’s backpack program packs a weekend’s worth of meals for 370 local kids who often having nothing to eat when they can’t get school-supplied meals. For Metts, the level of poverty among local youth reveals an even more disturbing trend.

“I think the bigger story is the poverty rates amongst children,” said Metts. “As of 2013—the latest data available—the poverty rate for children under 18 was 25.9 percent, compared to 19.2 percent statewide. This is what sets Bonner County apart from the state.”

As economic development experts look to improve life for residents of all classes, they face the problem of a local workforce that isn’t well suited for modern middle-class jobs. According to Wolkenhauer, Sandpoint natives who obtain college degrees or professional skills have to move outside of town for work. Meanwhile, companies eyeing Sandpoint as a potential business location can’t find a sufficiently skilled workforce to fill out their payroll.

“It becomes a sort of the-chicken-and-the-egg type problem,” Wolkenhauer said.

Fortunately, there are plenty of positive signs on the horizon. In the next part of this series, we’ll examine organizations that help address poverty in North Idaho and initiatives that address the root causes of cyclical poverty.