There’s something liberating about a band that doesn’t take itself too seriously.

For Chris Park, John Edwards and Jared Johnston, who collectively are known as BareGrass, the music they create is second only to the fun they have while doing it.

BareGrass is the second generation of a band dubbed Edwards Park Band, which was based more in the rock genre, while BareGrass lands comfortably amidst the bluegrass and Americana. 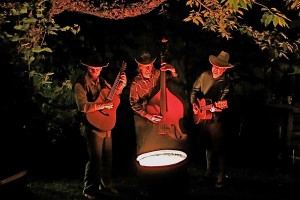 “We’d burned out a little on Edwards Park Band,” said bass player Edwards. “We decided to take a little break. Jared and I had a really good chemistry and decided to go acoustic. Well, Chris couldn’t stay out of the fold and before long he was back there practicing with us and we had a trio.”

The three have been playing together for around five years. It features Edwards on the stand up bass, along with two guitars played by Park and Johnston. The two guitars weave back and forth between playing rhythm and lead and all three sing, sometimes creating three-part vocal harmonies.

BareGrass bases their operations behind Misty Mountain Furniture—owned by Chris Park and John Edwards—and have been focusing on this debut album for the better part of a year and a half. The songs were written by all three band members.

“We all three write songs, alone and together,” said Edwards. “Some tracks are old songs we did as Edwards Park Band and reworked them a little.”

“We learned a lot in the studio,” added Park. “We had a lot of fun doing it, though it took a little longer to record than we expected.”

Listening to the album, you can hear slight differences between songwriters. While Park and Edwards lean their style toward catchy, fun lyrics and riffs, Johnston’s contributions to the album have a slightly bluesier feel.

The album “Barrel Fire” marks the debut effort by BareGrass, and what an effort it turned out to be. Featuring no less than 17 tracks recorded over the course of a year and a half, “Barrel Fire” brings a lot to the table.

Featuring a plethora of instruments and added bonuses, such as railroad whistles, mouth percussion, beers opening and added commentary before, after and during tracks, “Barrel Fire” is fun as hell to listen to. It’s the type of album you can listen to with a smile on your face.

“We like to keep it fun and upbeat,” said Park. “We like to sing about irreverent things. We’re not trying to send a message our there or pour our hearts onto the table. We just like stories and we like to have fun.”

The album was recorded by Mike Thompson at his Liquid Audio Studio in Priest River. Thompson is generally referred to by the BareGrass boys as the “honorary 4th member,” who fills in on the album with guitar, banjo and other effects.

“We’ve been buds for a long time,” said Edwards. “He played lead in Edwards Park Band and we jammed together a lot in the past.”

BareGrass will be releasing their album on Friday, Oct. 9 at Eichardt’s Pub starting around 8 p.m.

“Eichardt’s has always been our family,” said Edwards. “When we were Edwards Park Band, we were the Halloween house band thirteen years in a row.”

“We’ll be playing a variety of stuff from the CD and also some of our new stuff,” said Park. “Also, Mike Thompson will be joining us, along with a few other special guests.”

There is no cover charge for the show at Eichardt’s, and if you’d like to purchase a copy of “Barrel Fire” they will be on sale for $10 each.

“One hundred percent of the proceeds go toward us,” said Park.