Montana Rail Link opened up to media and conservation groups last week about the Aug. 13 derailment that overturned 33 cars and spilled 3,782 tons of coal.

In a tour of the site Thursday afternoon, Montana Rail Link Marketing and Information Officer Jim Lewis showed off the company’s efforts in cleaning up the site. In the two-and-a-half months since the accident, the company cleaned all but scattered remnants of coal that would have required removal by hand. The effort cost $2.5 million in infrastructure repair, freight claims and cleanup. 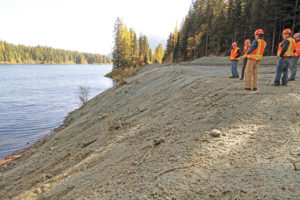 Montana Rail Link crewmembers give representatives from the media a tour of the derailment last Thursday. Photo by Ben Olson.

Cleanup efforts utilized 90 rail cars from across the country. Afterward, a vacuum truck removed coal from the riverbank and tracks. The area was then hydroseeded to promote future ecological health.

“It’s a remote site, so it was a challenge to get all that heavy equipment in here,” Lewis said.

According to Lewis, the cause of the incident is still under investigation by the Federal Railroad Administration. However, he said 99 percent of rail accidents are caused by either a faulty rail or a faulty wheel.

In order to prevent accidents before they happen, Montana Rail Link uses several inspection methods, some that go beyond federal regulation requirements. The company utilizes 10 assistant roadmasters who primarily inspect tracks, 245 employees on the tracks daily, geometry car inspections, rail detector inspections and 35 wayside detectors that inspect wheel impact, hot wheel, wide load and dragging. Despite the regular inspections, a malfunction was able to occur in the interim.

“(Derailments) could be (due to) fluctuations in the weather,” Lewis said. “It’s steel: It’ll buckle, it’ll sun kink.”

Nevertheless, Lewis said accidents are down 86 percent since 1997. He added that in the 3 million cars Montana Rail Link has moved since 2014, 44 have derailed.

At a Lakes Commission meeting the next day, Lewis said that despite the impression that Montana Rail Link didn’t take immediate action to clean up the site, the company was in fact working to mobilize the effort.

“In that 30 days, we weren’t just sitting back and doing nothing,” he said.

He also said that in the future, the company aims to improve communication with the public on how clean-up is progressing.