Bob Wathen has been the first and only fire chief for the Sam Owen Fire District since it was founded in 2002. Under Wathen’s leadership, the district has grown from a fledgling fire department with six firefighters to a full-service fire and rescue operation serving an area of 200 square miles. 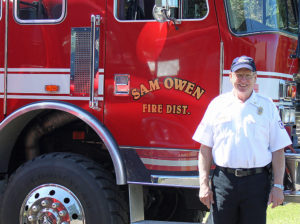 Wathen recently announced he would be retiring, and the community responded by hosting an open house reception at Sam Owen Fire District to celebrate his service. The open house takes place on Sunday, Oct. 1 from 1-3 p.m. at Fire Station #1 at the junction of Highway 200 and Peninsula Road. Everyone is invited to stop by for cake and ice cream to thank Wathen for his 15 years of service.

“When we founded the Sam Owen Fire District, we had nothing except six firefighters,” said Wathen. “We had a small budget and two used fire engines that we had gotten at a really good price. To improve our fire rating, which has always been a goal of the district, we had to build a station and get all the equipment required by the state of Idaho.”

Wathen’s wife of 49 years Teri said the hardest challenge was having a husband on call 24 hours a day: “It was a challenge at first, but you learn to roll with it,” she said.

While Wathen is retiring as fire chief, he will still serve the community as fire commissioner.

“It takes a lot of hard work, a lot of training,” said Wathen. “But as soon as you get into it and respond to your first fire, it grabs you or you don’t stay. It gets in your blood.”