Shannon Williamson, Joel Aispuro and Jeff Bohnhof answered an array of questions from an audience of about 60 about their hopes and priorities for the city. Candidates John Darling, Robert Jediny and Mose Dunkel, who is under fire following a Bonner County Daily Bee article alleging he was investigated for sending pictures of his genitals to random women, did not attend. 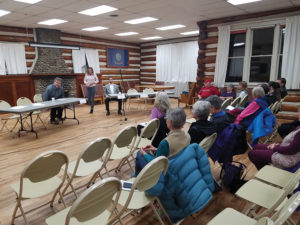 Forum questions covered the gamut of key Sandpoint issues. On the future of the University of Idaho extension property on Boyer, Williamson said she hopes the outcome respects the ideas of residents who have participated in recent city workshops. She also said she sees the importance of a popular desire to preserve recreation at the site, but the community must first develop a unified vision for what that looks like.

Aispuro said he’d like to see the future owner of the property keep it as beautiful as it is today.

Bohnhof believes the property presents opportunities for a variety of local projects, from improving housing availability to promoting recreational opportunities like trail riding or even a recreation center.

“This is a huge, huge opportunity to make Sandpoint shine,” he said.

On the switch to a two-way street system, Bohnhof said there are individual points of concern like the parallel parking layout on First Avenue. Otherwise, he said he didn’t know that he would change anything.

Aispuro said there were pros and cons to both traffic systems, and the best thing citizens can do in the meantime is drive carefully and be aware of their surroundings. He feels it’s important to take a careful assessment of the problems with the new layout before any changes are made, and that by working together as a community, the situation can improve.

Williamson agreed that there are problems with the new system, specifically the three-way yield on First Avenue. However, the more feedback the city gets from the public, the better it will become.

“I know it’s been a hard process, but it’s going to get better, and I think the city is doing a good job,” she said.

The recent distribution of racist flyers and emails struck Bohnhof, a member of the gay community, as a huge issue. The protection of local minorities is why he helped bring back the LGBTQ advocacy group PFLAG, he said. He added that it underscores the need for Sandpoint to protect local residents from eviction, job termination or the denial of basic services based on who they are.

Williamson said she has always felt Sandpoint is a place that welcomes everyone. While there is much debate over issues like refugees and immigration, and it’s everyone’s right to have that debate, she believes Sandpoint will have little luck attracting new businesses if it is not a tolerant community.

Aispuro believes the flyers are the doing of an extremely small minority of people. He thinks the majority of Sandpoint business owners have achieved success by welcoming all types of people, and as a Hispanic man, he has never experienced any kind of mistreatment based on his race.

“We should not let a small minority affect all the positive things that go on,” he said.