A coalition of law enforcement officials across North Idaho are investigating the officer-involved shooting of a Sandpoint man that occurred Tuesday afternoon. 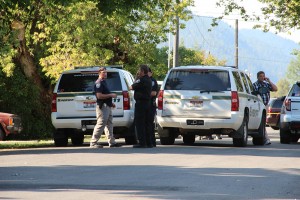 This week’s shooting occurred  at a residence on Ruth Avenue between Chestnut and Spruce streets. According to police officials, two Bonner County deputies and a Sandpoint police officer were “conducting enforcement activities” in the area (the Bonner County Dispatch press log indicates they were there on a felony warrant arrest) when they encountered Alarcon. A conflict ensued, and Alarcon brandished a firearm, firing two shots at the officers. A deputy returned fire and shot Alarcon with a single round. This accounts for the multiple shots that bystanders reported hearing, with most guessing they heard between two or three.

A video posted onto social media shows the aftermath of the shooting, with officers cuffing and transporting a younger male to a Ponderay police vehicle. “Sandpoint police just murdered my brother,” the cuffed individual says in the video.

“I heard three shots and then [the youngest brother] yelled, ‘Murderers, murderers, they murdered my brother,” she said. “I then called 911.” 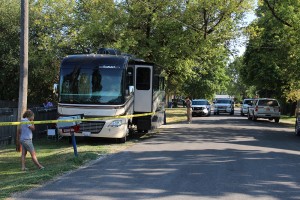 “They’ve been my neighbors forever,” Pederson added. “Both boys have been around this week, helping their dad.”

Meanwhile, investigation into the shooting is under way by the Region One Critical Incident Response Team, an organization of law enforcement officials from the five northern Idaho counties. The Kootenai County Sheriff’s Office heading up the investigation. According to police officials, officers have secured warrants to the site of the shooting and are collecting evidence. The incident was also captured on the officers’ body cameras.

This may not have been Alarcon’s first potentially deadly encounter with the police. A 2008 article in the Bonner County Daily Bee indicates he was arrested for allegedly robbing the Downtown Crossing bar and later said he wanted to be killed by police in the confrontation. According to the article, he pulled a gun on police when he was arrested on Nov. 24, 2007.

The incident left many Sandpoint residents reeling, especially since the officer-involved shooting of Jeanetta Riley on July 8, 2014, is still fresh in local minds. On social media, some were outraged by the incident while others defended police actions. Still others encouraged residents to stay calm until all the facts came to light.

“…Please wait for the full story, then argue in person if you must,” Mac Hollan advised fellow commentors on the Reader Facebook page.