Confucius, the foundational Chinese philosopher of the fifth and fourth centuries BCE, summed up the metaphysical power of archery with his widely repeated quote, “In archery we have something like the way of the superior man. When the archer misses the center of the target, he turns around and seeks for the cause of his failure in himself.”

Likewise, poets, thinkers and spiritualists from Japan to Arabia to Africa and the Americas have for thousands of years waxed eloquent about the elegance and challenge of accurately releasing an arrow from a bow. And that’s probably only scratching the surface of the peoples across millennia who have hefted a bow and marveled at its seemingly mystical mingling of human and natural mechanical power. 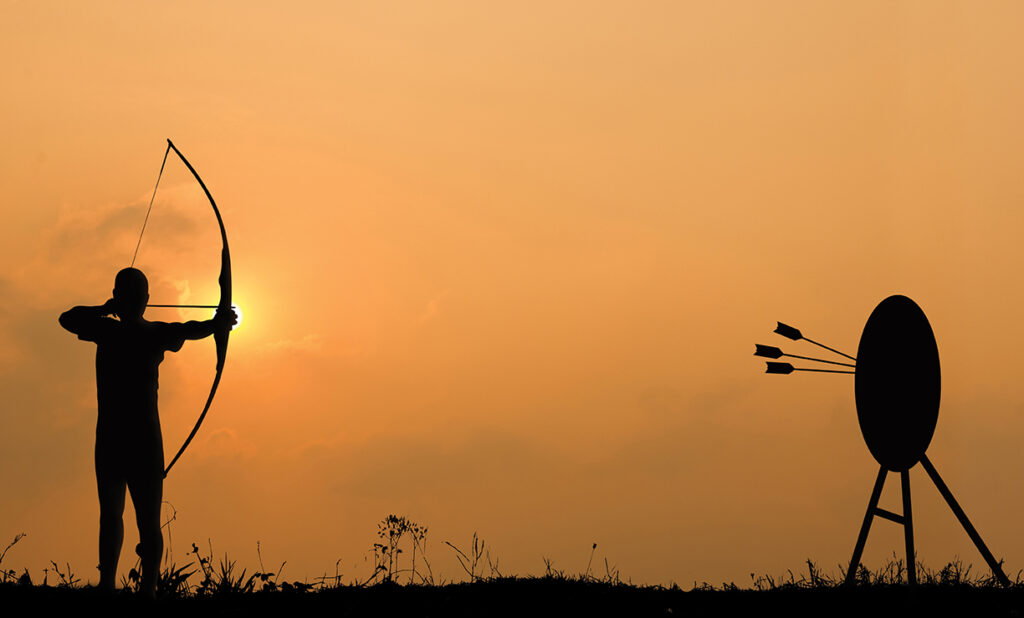 Silhouette archery shoots a bow at the target in sunset sky and cloud.

No one knows how long the technology of the bow and arrow has been with us. Archaeological evidence suggests bows and arrows have been in use for upwards of 71,000 years, dating to the Paleolithic age, when humans used materials such as wood and vine to craft their hunting weapons. Based on the prevalence of prehistoric arrowheads that have been found the world over, it’s beyond argument that the bow and arrow — and hence archery — is a basic human invention and skill.

Granted, many tweaks and variations developed over that mind-boggling expanse of time.

From the crude “self bows” crafted from one piece of wood by prehistoric hunters to the more varied material construction of composite bows, to short bows and recurves for mobility, longbows for distance and power, the perfected efficiency of the flatbows of Native American societies, and the enormous Japanese Edo era bows that married precision accuracy with range, the mechanics of the bow and arrow remained fundamentally unchanged from its misty origins at the beginning of the Stone Age to the invention of the modern compound bow in the 1960s.

Even then, incredibly, the physics behind the functioning of the weapon hasn’t changed a bit — a feat of intuitive understanding by our most ancient of ancestors. Essentially, the bow works by the channeled transference of energy. Properly constructed, the limbs of a bow (which in contemporary compound bows feature wheels known as cams at the tips) are incredibly efficient storehouses for potential energy. This energy is gathered when an archer — using their own musculature — pulls back on the bow string, immediately pushing all that power into the limbs of the bow.

The potential energy gathered in the limbs becomes kinetic energy when the string is released. The string functions not unlike an electrical wire, carrying a flow of energy to a switch where it can disperse in a focused burst — that is, the arrow, which is launched from the nock end, where it has been notched into the string.

Contrary to how it might look, arrows do not simply jump off the string and shoot across the arrow rest to the target; they flex and bend, oscillating as all that energy sizzles up their spine. That’s why simply firing a notched stick from a bow will result in crazy flight paths going nowhere. What’s needed to keep the arrow on target is stabilization, which is where the fletching comes in. These are the three little “feathers” at the back of the shaft, which act like mini-rudders, helping balance the oscillation of the arrow while slicing through wind and air pressure effects.

The “strength” of a bow is described as its draw weight, or poundage — that is, the amount of equivalent force needed to bring the string to full draw, which for longbows and recurves is generally defined as 28 inches in length. The length of the bow, the materials used to make it, the length of the string — all these factors combine to influence draw weight.

It sounds so easy: pull back on a tight string tied to the tips of a curved piece of wood, let go and watch the arrow fly. None of these notions of potential and kinetic energy entered our ancestors’ minds when they invented this technology — they just knew that it worked, and found increasingly ingenious ways to improve their techniques of construction, arrow manufacturing, types of arrowheads and, ultimately, turned this utilitarian device into a platform for artistic skill and even spiritual practice.

When I got my current bow, it had been a long time since I’d loosed an arrow. I’d participated in archery as a Cub Scout in Sagle back in the ’80s, grew up with an old green fiberglass bow that used to be dad’s when he was a kid and even took a semester of archery in college, but had never been a consistent bowman.

That changed when I was in graduate school, when firing off a few dozen arrows in the backyard became a regular, vital meditative stress relief practice (though I’m sure my neighbors weren’t too pleased to hear me out there thwacking the target at midnight). Balance, stance, posture, breathing — all the physics of the body must align with the physics of the bow to accomplish its task. This also sounds easy, but is deceptively difficult. People say golf is a mental game; archery is a state of mind.

As one anonymous poet once wrote:

“If an archer shoots just for fun he has all his skill. / If he shoots for score his hands tremble

and his breath is uneasy. / If he shoots for a golden price he becomes mad and blind. /

His skill was not lessened, but the vision of the target changed him.”