State GOP: ‘Bundy is not suited to call himself an Idaho Republican let alone run for governor’

Bundy threw his cowboy hat into the ring for what is shaping up to be an historically contentious Gem State Republican primary May 2022, announcing his candidacy before a crowd of “several hundred people” in Meridian on June 19, the Sun reported. 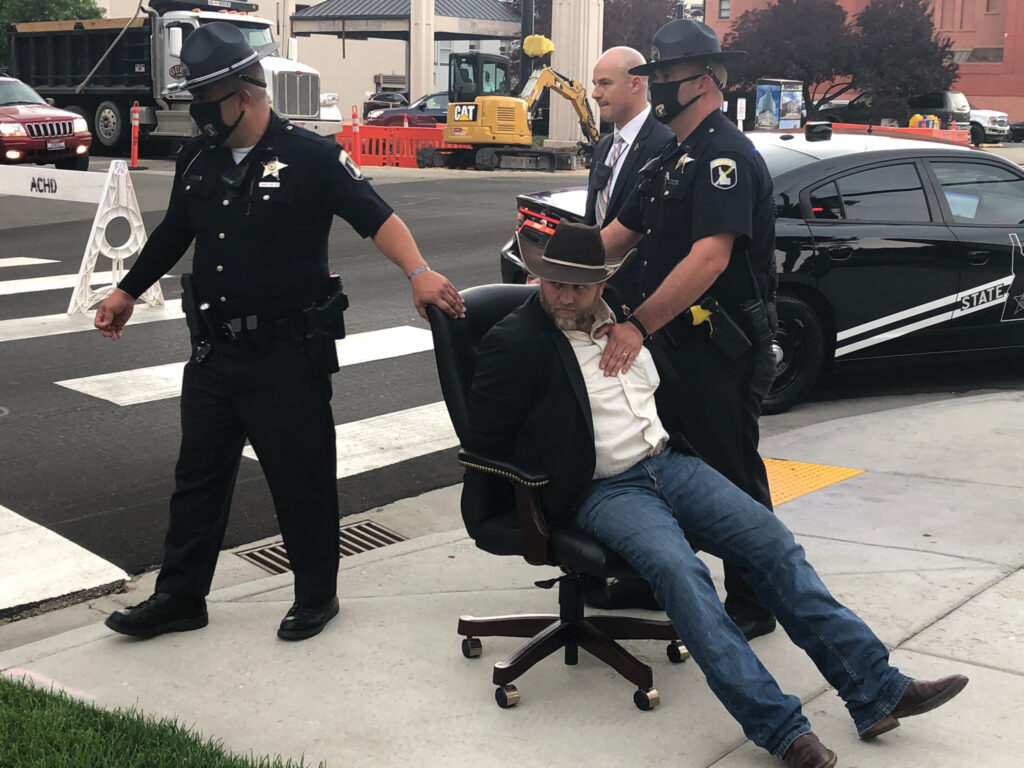 Ammon Bundy is wheeled out of the Statehouse Aug. 25 by ISP officers and charged with misdemeanor trespassing and resisting arrest. Photo by Ryan Suppe, Idaho Press, @salsuppe on Twitter.

“I know that securing liberty for the people of Idaho is what I was built for,” said Bundy, who moved to the state in 2015 — one year after he, his father and brother famously led an armed standoff with federal law enforcement officers over grazing rights at their Nevada ranch.

A year later, Bundy and his brother, Ryan, again made headlines by initiating another high-tension confrontation with law enforcement at the Malheur Wildlife Refuge in eastern Oregon — not far from Bundy’s adopted hometown of Emmett, Idaho.

While the 2014 Bundy standoff ended without bloodshed, the Malheur occupation — which attracted far-right conservative activists and militia groups from around the country to rural Burns, Ore., including District 1 Reps. Heather Scott, R-Blanchard, and Sage Dixon, R-Ponderay — ended as federal officers shot and killed occupier Robert LaVoy Finicum as the latter attempted to draw a gun on them after a backcountry road pursuit.

Since then, Ammon Bundy has cut an outsized figure in far-right Idaho politics. His profile notably rose during the COVID-19 pandemic and subsequent state-ordered lockdowns, during which his protests against Gov. Brad Little’s coronavirus orders led to his being arrested twice at the Capitol in 2020. As part of his punishment for the disruptions he was banned from the Statehouse grounds for a year.

More recently, in April, Bundy was arrested twice in the same day for suspicion of trespassing after violating his prohibition from Capitol grounds, according to the Associated Press and the Sun.

His candidacy adds a further level of drama to an already fraught gubernatorial race, which features current Lt. Gov. Janice McGeachin — who has in the past supported Bundy’s activism — vying for fellow Republican Little’s job for the highest office in the state.

The Little-McGeachin contest has already revealed deep divisions in the Idaho Republican Party, with the former representing the more “traditional” wing of the party and the latter running an insurgency campaign on behalf of its hard-right “liberty” faction.

Bundy’s official entry into the field — hinted at for months, yet delayed by the fact he initially filed with himself as campaign treasurer, though he’s not a registered voter — brings another element, especially as he’s been officially denounced by Idaho GOP Chairman, and former Superintendent of Public Instruction, Tom Luna.

In a statement issued June 4, the Idaho Republican Party — in a statement attributed to Luna — rejected Bundy’s “antics” and “chaotic political theater.”

“That is not the Idaho Republican Party, and we will not turn a blind eye to his behaviors,” Luna stated, adding later, “Ammon Bundy wishes to divide our party, openly supports defunding the police and has known alliances with the radical factions of the Black Lives Matter (BLM) movement.

“Republicans are the party of law and order, and Ammon Bundy is not suited to call himself an Idaho Republican let alone run for governor of our great state,” Luna stated.

The People’s Rights group’s demonstration attracted participants from as far afield as Seattle to protest the Sandpoint library’s COVID-19 face covering policy, which was lifted earlier this month.

“As the Republican nominee, I will clean up the party and I will get it united once again in a direction that will protect the people’s rights again,” Bundy said, according to the Sun.