A haven for the kiddos

Kinderhaven, like many worthy nonprofits, began out of a need that one special person saw in the community.

Marcia Ogilvie was a business owner, Sandpoint City Council member and Sandpoint mayor whose passion for service eventually led to the founding of Kinderhaven, North Idaho’s only privately-funded group home and emergency shelter for abused and neglected children. In 1996, Ogilvie rented a small house in Sandpoint, worked with state agencies and raised money to ensure this nonprofit would have a lasting impact on area children in need. 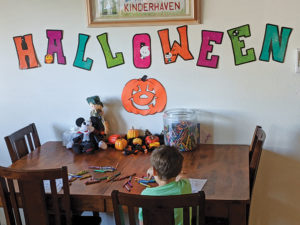 A child staying at Kinderhaven works on a coloring book. Photo by Brittane Barker.

Twenty years later, more than 1,500 local kids have found shelter and safety through the doors of Kinderhaven, a legacy that Ogilvie took pride in until she passed away in 2014.

Today, Kinderhaven continues Ogilvie’s legacy by providing emergency shelter for children who have been removed from their homes for protection — filling a need that Executive Director Jennifer Plummer sees every day.

“Before [Kinderhaven], kids were put into the Juvenile Detention Center when they had nowhere else to put them,” said Plummer.

The facility, with a staff of 10, can house up to 16 kids at a time with no limit on their length of stay. It provides the same support a household would offer, including rides to and from school, rides to sports activities and appointments, meals and even emotional support. The facility has been at capacity for about two years, Plummer said.

As one could imagine, running the household for 16 children can be a Herculean task — one that Kinderhaven staffers take on happily each day.

“Every day is jam-packed,” Plummer said.

A whiteboard in one office is filled with kids’ activities and appointments that Kinderhaven staff take on as their responsibility. Between running kids to school, to various appointments with doctors and counselors, as well as sports events and everything between, it is indeed a busy household at Kinderhaven.

Each child at Kinderhaven has a court appointed special advocate assigned to them who helps ensure the best interests of each child are met. While there is no limit for each child’s time at Kinderhaven, Plummer said the average stay is six months to a year.

“When kids are here for several months, they see consistency,” Plummer said. “It takes a while to build up that trust, but they start to build it. We really start to see a change.”

“Kinderhaven is an understanding kind of place,” one 14-year-old current resident said. “I really enjoy the staff’s company. All of them are really nice and sweet plus funny. … I love this place and it isn’t that bad.”

According to one Kinderhaven 17-year-old, “This place has changed my life for the better. I’ve become such a bright young lady and I’ve come so far. I love all the family interaction we have gotten. This place has helped many lives.”

While Kinderhaven mostly focuses on the needs of the young people in its care, Plummer said the staff has also worked with parents to help establish model parenting behavior. If parents test clean for illegal substances, Kinderhaven also facilitates family visits.

The nonprofit receives no federal funding and only 15% of its financial support comes from the state of Idaho — the other 85% comes directly from the community and donors.

The largest fundraiser for Kinderhaven is the annual Festival of Trees, a three-day series of events during which members of the community decorate trees and gather to support the organization. Family Night is Thursday, Dec. 5 from 4-6 p.m. at the Bonner County Fairgrounds, where the public can attend free of charge to view the decorated trees while sipping hot cocoa, munching on cookies and meeting with Santa. The Holiday Luncheon will take place Friday, Dec. 11 from 11 a.m.-1:30 p.m. and includes a silent auction. Tickets are $50 and table sponsorships are available for $650 (seats eight people).

The festival culminates with a gala at 5:30 p.m. on Saturday, Dec. 7, at which guests can peruse silent auction items while snacking on hors d’oeuvres before enjoying a dinner catered by Ivano’s Ristorante. Dinner will be followed by a live auction of the decorated trees and packages. Tickets are $85 and table sponsorships are $1,400 for eight people. All proceeds directly benefit Kinderhaven.

Plummer said one of the most rewarding aspects of her job is visiting with young men and women who had stayed at Kinderhaven in the past and returned to visit.

“We have a young lady who graduated from high school and comes back to visit regularly,” Plummer said. “She’s thriving now. She loves to visits her ‘Kinderhaven moms.’”

Because Kinderhaven has been at capacity for about two years, Plummer said there may be a need to expand in the future.

“Our board is actively at work strategizing the expansion of our services so that we can serve even more of our local Sandpoint children,” Plummer said.

For more information about Kinderhaven, or to purchase tickets to the Festival of Trees, visit kinderhavensandpoint.org.