Oldtown resident Patrick Allen Geaudreau, 27, is at large and wanted by police after a chase that crossed state lines into Washington and ended with two individuals fleeing on foot. Law enforcement officers are warning residents to stay alert and secure their vehicles as the manhunt for Greaudreau continues. While the investigation involves two suspects, police have only positively identified Greaudreau. 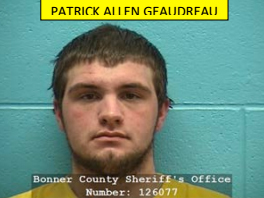 The incident began 11:16 p.m. Monday, when Bonner County Sheriff’s deputies attempted to stop a maroon Jeep Grand Cherokee on Tweedie Road near Highway 41. When the driver refused to pull over, deputies gave chase, pursuing them into Washington southward to Spring Valley. An individual identified by deputies as Greaudreau allegedly opened fire on the deputy vehicle, striking it several times in the hood and driver’s side compartment and riddling it with bullet holes. While the deputy was not hit, their vehicle was disabled.

Since the evening of the chase, Pend Oreille County Sheriff’s Office has taken over the crime scene and investigation. Criminal charges are filed in both Idaho and Washington. 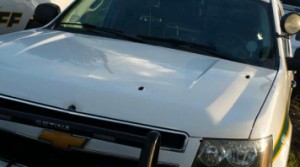 Bullet holes can be seen in the hood of the Sheriff’s vehicle. Photo courtesy of Bonner County Sheriffs Office.

Law enforcement authorities consider both suspects to be armed and dangerous and recommend citizens call 911 if they believe to have spotted them. They also warn regional residents to keep an eye on their vehicles and make sure they’re secured, as it is likely the suspects will attempt to steal another car.