An ode to beer

Many of the more interesting episodes in my life have been sponsored by beer. 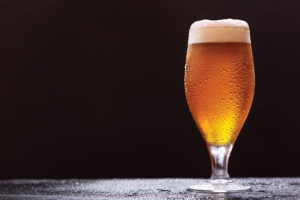 There was the performance of 90210-themed haiku at a prominent open mic night and the time I stroked musician Jack Johnson’s arm and told him he was “pretty.” There was the time I found my way home in London on a night I lost my wallet, managing to trade a pack of smokes for a cab ride from a non-English-speaking driver (never mind that I don’t smoke, have never bought cigarettes, and don’t speak Somali). And, of course, there are many other stories I can’t mention for fear that you or my mother-in-law might read them.

For all the stories, I have beer to thank. For my survival, I can thank luck.

As I’ve gotten older, beer still plays a part. It helped my now-husband and I get over our anxieties and introversions on our first awkward date. It might actually be responsible for the existence of our daughter, and it has since helped us survive teething and tantrums. It has facilitated the forging of new friendships, and it is a way of thanking employees after a hard day’s work.

Beer, at this point in my life, is fellowship, connection, communion. It is a breaching of the walls that divide us — walls that serve to hide our fears and feelings — making us more visible and vulnerable. Making us more comfortable with that vulnerability.

Beer, for me, was once a story generator. Now it is a story-bridger.

Honestly, I’m probably placing more emphasis on the beauties of beer than is deserved. I blame it on wistfulness. You see, I can’t drink beer right now (which is another story, one about inflammation and dietary elimination that I promise not to write because … ugh, so lame), and it’s much harder than I anticipated.

The difficulty doesn’t come so much from the cravings. I mean, yes, I miss the taste of beer, but that missing is manageable. The real difficulty is in all the associations I — and our culture — have with the beverage.

Beer is a punctuation mark. It is the period I put at the end of the workday before I start the new paragraph that is the evening routine. It is the exclamation point I place after reaching milestones and accomplishing dreams. It is the question mark I use when difficult subject matter must be addressed, and the queries have to be lured out of dark, hidden places. Sometimes it is the comma that slows life down to a manageable speed, forcing me to sit, to relax, to talk.

Without beer, how do I define these feelings, sentences and spaces?

Beer is also about identity for me. Somewhere along the way, I received enough positive reinforcement regarding my preference for PBRs over blue-hued cocktails to wear the affinity as an emblem: of being accessible, grounded, low-maintenance. Just toss me a beer, thank you; I need nothing more to be happy and present with you.

In my 20s, as I began to inhabit a space on the political spectrum decidedly left of my father — and philosophies decidedly “out-there” to his way of thinking — beer was always our equalizer. We might not have understood each other’s values, but we could easily share space over pint glasses, finding our way back to familial embrace.

How is it that beer is imbued with such power? More so than coffee or even cocktails, it is communion that is somehow both casual and potent.

No matter how highfalutin I get with things like meditation retreats and fancy words and Spiral Dynamics, if I can still sit down with you over beers, then I am still tethered to this earth. I am still humble. I am still a fun and easy person to be around.

Without beer, how do I prove to you my accessibility?

There is also the issue of beer’s centrality to evening entertainment. Here in Sandpoint, we have two lovely new breweries, Matchwood and Utara, whose spaces are both cozy and vibrant. And there are the standbys of Eichardt’s, MickDuff’s and Idaho Pour Authority that I have always enjoyed. These are my preferred downtown hangouts, but hanging out at Eichardt’s with a hot tea in hand just ain’t the same. I find myself gazing longingly at the tap handles, the candy store that this kid can no longer frequent.

When I look at Sandpoint’s calendar of events each week, the offerings are usually, Live Music at <insert drinking establishment here> repeated a dozen times over. Invites to potlucks typically end with a call to BYOB. Impromptu weekend gatherings tend to involve a shared drink while the kids play.

We used to joke that, for its mellowing effects, PBR should stand for “Parenting Better Right-now.” Meanwhile, being the parent with a scotch in hand at two o’clock on a Sunday doesn’t speak to parenting better. Not at all.

I should buy stock in La Croix for all the sparkling water I have consumed in recent months. It comes in a can and is fizzy — an approximation of beer — but it is a weak punctuation mark, identity conveyor, connection maker and entertainer.

I expected this dietary change to be an adjustment, not an existential crisis. The fact that I am flirting with the latter reaction points to my heretofore unexamined relationship with alcohol. Though my college drinking days are a distant and hazy memory (thank goodness), perhaps my continued affinity for beer is not a wholly healthy one. Perhaps I rely on it too often to carry me through social encounters, to open me up, to mellow me out. Perhaps there are better ways to convey humility and receptivity than by pounding a pilsner. Perhaps I should be shamelessly into vipassana and poetry and Integral Theory without feeling the need to apologize or qualify my interest via the consumption of whatever cold one is on hand.

Or maybe there is absolutely nothing wrong with me, and it’s just that beer is really, really, really good. On many levels. Like love and Mary Oliver’s musings and “Game of Thrones.”

Whatever the case may be, I know that adversity is an educator. This slight bout of grief over beer’s absence is a chance for me to learn. And to grow — unapologetically. So let’s raise a glass of fizzy water to that.