My first experience with refugees was more than 50 years ago. Just a couple of blocks from my childhood home in Helena, more than a dozen Cuban high school boys were housed in Brondel Hall (formerly the Toole Mansion), and the younger children were placed with the nuns at St. Joseph’s Catholic Orphanage. The most vivid memory I’ve retained is that of the Cuban boys dancing with my sisters and their friends in our basement. Per my suspicious father, I was the eight year old chaperone in the corner (it’s no wonder my older sisters resented me for so many years).

Weekly, my mother would go to the orphanage to mend the hand-me-down clothes for the young refugees (it would be twenty more years before I learned the reason my mother was so devoted to those children: along with her two younger siblings, she’d spent three long years at that very orphanage).  That orphanage must have felt so foreign to those children.

Cuban parents fearing that the Cuban government would take away their parental rights exercised one of the most fundamental human rights: the right to choose how their children would be raised and educated. More than fourteen thousand Cuban youths arrived alone in the United States. What is now known as Operation Pedro Pan was the largest recorded exodus of unaccompanied minors in the Western Hemisphere. Approximately half of the minors were reunited with relatives or friends at the airport in Miami while the remaining children spent up to a year in makeshift camps before being relocated to various parts of the US via the Catholic Church network. More than one hundred of them would call Montana home for the next couple of years.

My next experience with refugees was with the Hmong in Missoula. These mountain people fled Laos after it fell to the Communists in 1975. I’d see them every week at the livestock auction house, purchasing pigs and heifers for their new settlement in the Bitterroot Valley. Years later I would buy produce or small roasting pigs for my catering business from their growing population. These families were never without all of their children in tow, babies bound to their mothers as they unloaded crates of vegetables, and anyone old enough to walk was stacking neat rows of radishes and baskets of berries at the Missoula Farmers Market. Today they thrive at the market and are one of the largest contributors to the Missoula Food Bank.

My daughter Casey is married to John, an Egyptian. The year before the wedding, her future mother-in-law Mirfat came to spend a week with me.  In my home, the natural place to build a strong bond is the kitchen, so while she taught me to make Greek yogurt, labneh (cheese from Greek yogurt) and the most savory hummus ever (recipe included), we shared stories of our own youth, our cultures and the dreams we held for our children. I learned that she and her husband fled Egypt primarily for religious freedom. She was so grateful to be in the US that she dressed her two children as little saints for the first year of their lives, which John labeled “the most awkward family photos. Ever.”

Lately, I’ve thought of my own ancestors who fled their homeland to Nova Scotia because mothers were literally watching their children starve to death in Ireland. In the exodus, many of them perished in shipwrecks along the rocky coasts of Cape Breton. I think about the Cuban parents who made the greatest leap of faith ever, handing their children over to complete strangers to ensure them a better life. I remember the Hmong who arrived in a foreign land without a written language, ostracized by the uninformed, at times even falsely labeled as North Vietnamese trying to infiltrate the US. And I can’t help but think of all the young girls in the Middle East who can only dream of raising their own children in peace.

With deep gratitude that my own daughters and granddaughters can worship as they chose, study what they are eager to learn and live their lives mostly free of turmoil, I offer you this delicious recipe for Syrian Spice Cake.

Though this recipe originates from Syria, with grated nutmeg from seeds I purchased in Italy, pistachios from California and Mirfat’s homemade yogurt, this recipe transcends borders. That’s food for thought. 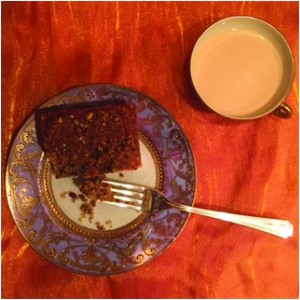 •1 tsp ground nutmeg (grind fresh if you have nutmeg seeds)

•Sift the first 3 dry ingredients into a mixing bowl and add the brown sugar and butter.

•Blend until mixture is crumbly. Grease a 9 inch square cake pan. Spoon in half the crumb mixture and press lightly into the bottom of the pan.

•In another bowl, stir baking soda into sour cream or yogurt. Mix this into remaining crumb mixture along with the beaten egg.

•Pour batter over crumbs and sprinkle with nuts.

•Bake at 350 degrees for 40-45 minutes or until toothpick put in the center comes out clean.

•Chop garlic in the food processor until fine, add all the other ingredients and process until smooth.

•Correct seasoning with more lemon juice and/or salt to taste.