High hopes on the slopes

Olympic Dreams, screening at the Panida, tells a meet-cute story in a unique setting

Some films draw their juice from a stellar ensemble cast. For others, it’s a killer premise. For some, like the 2019 rom-com Olympic Dreams, the setting makes the movie. Filmed on location at the 2018 Winter Olympics in Pyeongchang, South Korea, it’s a mature meet-cute romance fueled by the energy of the games, the Athletes Village and Olympic dining hall. 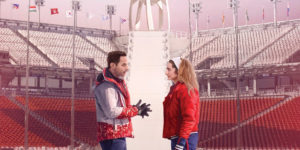 Starring comedian Nick Kroll (Kroll Show, Big Mouth and The League) in a more-dramatic-than-usual role opposite real-life Olympic runner Alexi Pappas — the wife of director Jeremy Teicher — Olympic Dreams is a unique blend of fact and fiction. Though Pappas’ role as a 22-year-old cross-country skier is made up, many of the other athletes in the film aren’t acting as Teicher’s camera captures them gearing up for their respective events.

Among the actual athletes to make an appearance is skier Gus Kenworthy, underscoring the unprecedented level of access granted to the film crew, which shot the movie under the Olympic Artist-in-Residence program.

Critics universally praised the inventive format, as it provided an unprecedented glimpse into the culture and personalities behind the scenes in Pyeongchang — it also provided a built-in dynamism to the plot, which revolves around Kroll Ezra, a volunteer dentist (because that’s a thing at the Olympics?) and Pappas as Penelope, whose titular “Olympic dreams” haven’t quite worked out the way she wanted.

Ezra isn’t in a great place either, as the 37-year-old tries to get over a breakup with his fiance back in New Jersey.

From there, it should be pretty obvious where this all goes. Ezra is a vulnerable yet extroverted, goofy nice guy — definitely on brand for Kroll — whose charming neediness mingled with the exoticism and excitement of the South Korean games work their magic on tentative, anxiety-plagued Penelope.

Screen pundits ranging from rogerebert.com to the LA Times, Hollywood Reporter and reviewers at South by Southwest — where the film premiered last March — had good things to say about the appealing chemistry between Kroll and Pappas. That’s an accomplishment, considering the wide age difference between them. Is it believable that a 22-year-old Olympic athlete would fall for a stubble-faced “volunteer dentist” 15 years her senior? We’re not so sure (and it’s hard not to think of Kroll in his role as rude-dude radio shock-jock “The Douche” in Parks and Rec). But, again, the setting and location of the film helps paper over its dramatic flaws.

More successful than the romantic plausibility of the couple is the film’s internal rumination on failure and how it plays hell with a person’s identity. That’s an especially interesting angle to consider in the context of striving for athletic greatness, and has led many reviewers to single out Pappas for particular praise (she set a Greek record in the 10K at the 2016 Summer Games in Rio de Janeiro, so she knows exactly what it feels like to devote a lifetime to achieving excellence in the field).

Though garnering a respectable 68% critics’ rating on rottentomatoes.com — audience scores haven’t been curated yet, as the film only hit theaters on Feb. 14 — the cineophiles at rogerebert.com wondered aloud if perhaps Olympic Dreams would have been better if it leveraged its access for a documentary, rather than an otherwise standard issue tale of odd couple romance.