‘My Octopus Teacher’ is a great film; the weird dialogue surrounding it is disappointing

Midway through my first semester as a grad student in history I’d had enough of complexity. Reading about 1,000 pages a week, grading papers for 70+ freshmen and participating in three weekly three-hour seminars — on top of thesis research and writing, plus the normal business of having a family consisting of two little kids — I found it hard to maintain “happy warrior” status when contemplating Geertzian “webs of significance” and Foucauldian power dynamics. I almost lost it one afternoon when a professor in historiography class asked — with a smile — “Why let it be simple when it can be complicated?”

Don’t get me wrong, I’ll happily wander into the weeds on any number of cultural, academic and artistic subjects. I am an unashamed tweed-wearing egghead, but the notion of complexity for complexity’s sake makes me nap with exhausted rage. That’s how I felt when I read some of the cultural criticism surrounding Netflix documentary My Octopus Teacher. 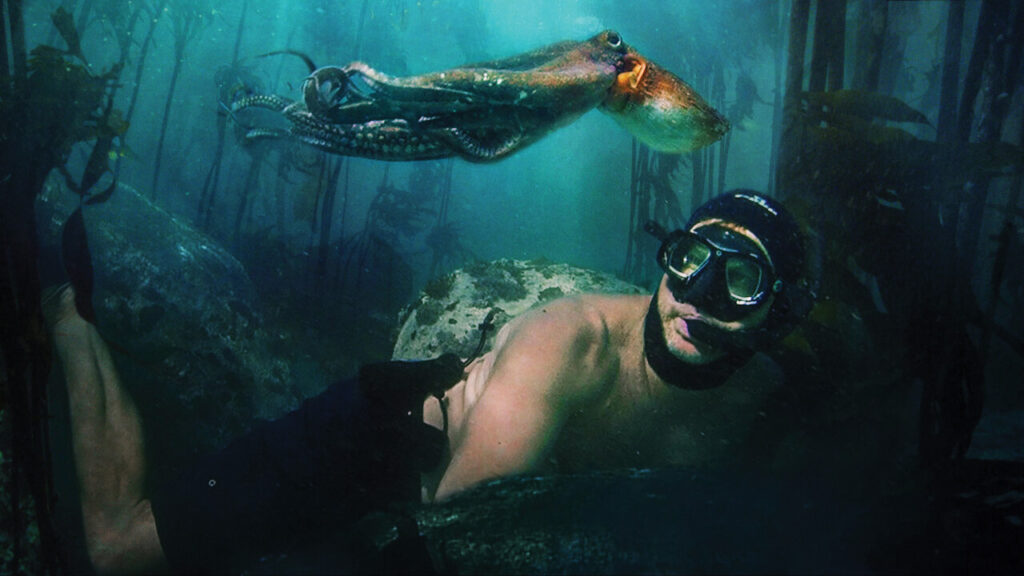 Craig Foster swims with the common octopus he befriended in My Octopus Teacher. Courtesy photo.

At the center of this gorgeous film is a simple idea: a man gets burnt out with his filmmaking career and retreats to his home on the Atlantic Coast of South Africa. Swimming in the nearby kelp forest, he “meets” an octopus. The two form an apparent bond, as the man — Craig Foster — returns day after day to visit his “friend” and explore her world.

Of course, what has people so entranced by this film is the “lesson” taught by this octopus teacher: Foster felt removed from the natural world and wanted to feel a part of it. The octopus showed him — or reminded him — that he and by extension we are already always of this place, cephalopod and human alike, but we too often forget by focusing on our differences. As Foster says in the film, “she was teaching me to be sensitized to the other.”

That is a complex idea made simple; what Albert Einstein described as the goal of genius. Alas, rather than genius we have Twitter, which has taken this simple, powerful snapshot of life on Earth and complicated it with a tortured, quasi-academic sexual analysis that unintentionally proves the point of My Octopus Teacher.

A host of publications have weighed in on this phenomenon — from The Guardian to Wired magazine — all scratching their collective heads over how anyone could watch this documentary and come away with the idea that Foster had a romantic, sexual relationship with an octopus.

OK, there are many flaws in this movie. For one, I found myself annoyed at how nebulously rich Foster seems to be that he can be the student of an octopus in the first place. It bothered me that his family seemed to exist as a blank support structure for what Foster himself described as “an obsession.” His entitled sense of connection with the octopus was also galling at times; that he could equate filmmaker burnout with the immediate life-and-death struggles of an octopus was silly. I wasn’t there in the water every day, though in general it’s hard not to come away with the feeling that Foster is kind of a silly man and the octopus is rightfully the star of this show. No matter what, in no way was there a sexual over- or undertone to their relationship.

Yet, the kind of analysis joked at by Lewis is very important — we should look at the ways humans interact with humans and humans interact with animals, and ideas of sexuality, gender and reproduction most certainly play a part in those analyses. Hell, My Octopus Teacher ends with the octopus giving birth and promptly dying (sorry, that was a spoiler, but I think we all know that octopuses, like salmon, shuffle off their mortal coils after they replicate themselves).

Beyond all that, “Twitter’s Sexual Fascination With a Not-Sexual Octopus Movie,” as Wired put it, reveals that we have alienated ourselves so profoundly from the normal functioning of life that when we see the normal functioning of life, our first inclination is to freight it with all the weirdness at our internet-enabled disposal. Watching My Octopus Teacher, and viewing the larger discussion surrounding it, mollusks look far less alien than we, who are more complicated than necessary.