Music from the Heart

Roger Fisher of Heart set to rock the Panida this weekend

Seeing as most would consider the Panida Theater the heart of the Sandpoint arts scene, it seems particularly fitting that Roger Fisher of the popular ’70s and ’80s band Heart will take the stage Saturday, Feb. 22. 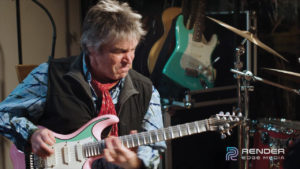 Roger Fisher doing what he does best. Photo by Render Edge Media.

Though the iconic duo made up of sisters Ann and Nancy Wilson is often remembered as fronting the group, Fisher was also a founding member of Heart. The Wilsons and Fisher, along with a handful of other original bandmates, were inducted into the Rock ’n’ Roll Hall of Fame in 2013.

Fisher began playing guitar in the ’60s, ultimately helping to found Heart in the mid-1970s. He left the band in 1979 and went on to pursue solo work along with other collaborative efforts, touring the world along the way. Fisher is currently touring to promote his album Heart of the Blues. His Sandpoint concert will showcase songs from the album alongside Heart classics, with the help of a world-class band and vocalist Carol Ann Wood.

Fisher is known for his unique approach to playing guitar, as he has always been drawn to interesting, new sounds. In an interview with Render Edge Media, Fisher recalls recording “Barracuda” for Heart’s 1977 album Little Queen. He said he and the rest of the band were taking their time because they had a hunch that it could become a major hit.

“At some point, I had my guitar on, and I reached behind my amp to do something, and … it starts making this wild sound,” he said, verbally imitating the whirring sound that began coming from his instrument. “I realized that it’s the proximity of the guitar to the tubes and the flanger, all working together to make this wacky sound.”

The band decided to use the sound near the end of the recording, but while making notes on exactly what it was, Fisher’s invention needed a name. He called the unusual feedback “alien attack.” He recalls the story like a true songwriter — amused with the happenstance that led to the sound making into the final recording, but not at all surprised by it.

Fisher, who played the Panida in June 2019, told the Reader that he and his brother Mike — also a former member of Heart — have several close friends in Sandpoint, and enjoy both the winter and summer activities that North Idaho provides. The venue is also an inspiration for Fisher’s return, he said.

“Older theaters are a joy to play in,” Fisher said, of the Panida. “They are like a living being, with their history of talented people who have worked the stage, unfolding their own dreams in their walk through life.”