Dogs of North Idaho: It’s your time to shine.

The Eichardt’s K-9 Keg Pull returns Sunday, Feb. 23 as the final event in Sandpoint’s annual Winter Carnival. This endearing event has quickly become one of Sandpoint’s most iconic fundraisers, featuring dogs big, medium and small pulling everything from kegs to beer cans down dual race circuits to record the fastest time. 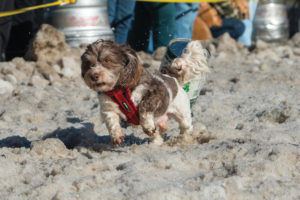 One of the four-legged racers at a past K-9 Keg Pull going for the gold. Photo courtesy John Hatcher, EzyDog.

For a $10 entry fee, dog owners may enter their pooches into three different categories: small (under 30 pounds), medium (between 30 and 89 pounds) and large (over 90 pounds). Each dog gets two runs to establish the best time, with prizes handed out for fastest runs in each category, as well as the coveted “People’s Choice” award. The event is sponsored by Eichardt’s Pub, EzyDog and Selkirk Press, with all money raised from entry fees and spectator donations benefiting the Panhandle Animal Shelter. The event raises between $1,000 and $1,500 for the shelter each year.

This year, the Keg Pull will take place in a brand new location on Cedar Street between Second and Third avenues in downtown Sandpoint. The move from the Granary came as a result of redesigns in the parking lot that cut into the length of the race circuits.

“We’ll run the races down the middle of Cedar, with spectators on the sidewalk and where cars normally park,” said Eichardt’s Pub owner and event organizer Jeff Nizzoli. “We’ll have the awards at MickDuff’s [Beer Hall’s] grassy area so we can clean up all the snow.”

The Keg Pull originated more than 20 years ago as a fundraising event at the Pend Oreille Brewing Co., which operated in the building where MickDuff’s Beer Hall is currently located.

“When they closed in 2001, Roy Manning, a bartender there, came to me and said, ‘Take this event over, it’s a blast,’” Nizzoli said.

More than 150 dogs and twice as many spectators usually turn out for the event, which kicks off at 11 a.m. Sunday, Feb. 23. Registration opens at 10:15 a.m. Because the street will be closed to motorized traffic, spectators are welcome to purchase food and drinks from MickDuff’s Beer Hall, Idaho Pour Authority, Di Luna’s Cafe or Eichardt’s Pub, which will be serving in plastic drinkware. No outside alcoholic beverages are allowed.

Nizzoli said a lot of volunteers have helped make this event successful each year.

John Hatcher, who owns a dog harness manufacturing business called EzyDog, has been providing keg-pulling harnesses since the beginning.

“It is a great cause and it is also super fun for the community to get out together and celebrate the outdoors with their dogs, which is what EzyDog is all about,” Hatcher said.

Hatcher began donating the use of his harnesses after noticing that other harnesses were unwieldy and didn’t support the dogs very well.

“Our Chest Plate Harness turned out to be much easier for us to do quick set ups at the starting line and just streamlined the process a lot more,” Hatcher said.

Colton Plue has built the race course for “many years,” Nizzoli said, and Wesley Dustman with Selkirk Press has been the official timer for 20 years, as well as making posters and organizing volunteers.

Over the years, the Keg Pull has established a lot of charming memories for spectators and competitors alike.

“One year, this lady stood in line and asked if we had really small kegs,” Nizzoli said. “I said we did, but that she needed to have a dog. Out of her pocket, she pulled out this tiny dog that was in her hand. Someone quickly finished a beer and we tied it onto her dog. It was so funny, a big dog ran right before her and made huge paw prints in the snow, so when her little dog went down the track, it would go down into the paw prints and you’d completely lose sight of it and just see a little beer can following behind.”

For dog owners interested in tips to increase race speed, Nizzoli said it’s important for the owners to be at the finish line when the race starts, because if they only stand halfway down the course, their dog will catch up to them quickly and slow down before the end.

“Winning dogs do it in six or seven seconds,” he said. “Some dogs do it in two or three minutes — those are the ones who get distracted.”

Owners are allowed to use whatever props they need to egg their pooches on, including food bribes, special toys, even the dog’s friend from home to help encourage a good chase.

Nizzoli said the event continues to be such a success because it brings “together families and their animals. Kids love it, dogs love it. Everyone’s welcome but cats.”